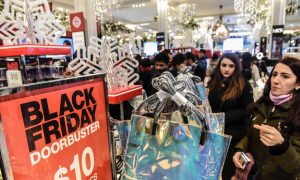 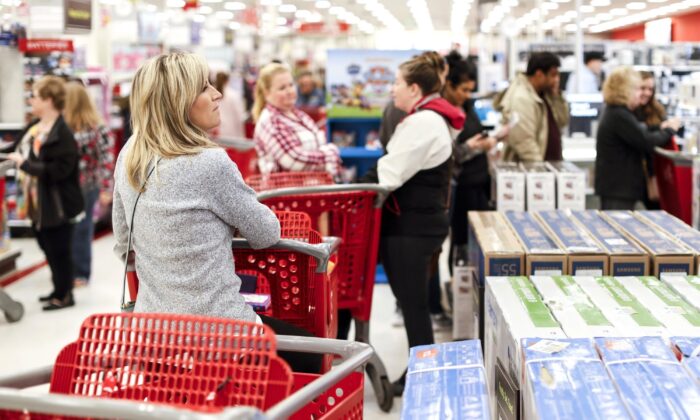 Shoppers wait in line for Apple iPhone purchases during a Black Friday sale at a Target store in Newport, Ky., on Nov. 23, 2018. (John Minchillo/AP Photo)
US News

Warnings have been issued ahead of Black Friday sales urging parents to practice caution when buying toys for their children.

Consumer and healthcare groups are cautioning parents to be vigilant when doing their holiday gift shopping today, amid reports that an estimated 226,100 were hospitalized last year for toy-related injuries, according to the U.S. Consumer Product Safety Commission (CPSC).

Of these statistics, at least 17 children died of their injuries and 166,200 affected children were aged 15 and below. The toys which contributed to the most injuries were non-motorized scooters, toy balls, toy vehicles, and building sets, in that order, reported the Washington Examiner.

Before toys can be sold in the United States, manufacturers must comply with more than 100 tests and regulations by third parties.

Emily Samuel, program director for Safe Kids Worldwide, told the news outlet that parents should ensure the toys they buy have the appropriate age labels and warned against buying small children toys which they could potentially choke on.

“Remember to read the age recommendations and warning labels to make sure you are choosing the right toys and games for your child’s age and developmental level,” Samuel said. “It is also important to separate toys in your home by age. Toys designed for older children may pose a risk to curious, younger siblings.”

Other consumer groups meanwhile warned against purchasing counterfeit toys for their children online, or neglecting buying a protective helmet when buying their kids toys such as scooters and other riding toys.

Parents should avoid buying secondhand goods where possible or passing toys down through the family, as some may have been manufactured before it became illegal to use lead in toys in the United States.

“The holiday season is a festive time with family and friends and we, at CPSC, want that time to be hazard free,” said Dana Baiocco, the agency’s commissioner, in a statement.

The CPSC added that deflated balloons should be kept away from children aged eight and younger, urging parents to discard balloons immediately once they are broken.

Kwame Raoul, attorney general for Illinois, published a “2019 Safe Shopping Guide” containing some of the toys recalled by the CPSC.

“This year, I am urging families to be aware of recalls of certain infant incline sleepers and infant rocking sleepers that have been connected to infant deaths,” he wrote.

“The guide also includes other recalled children’s items, such as children’s clothing that does not meet flammability standards, toys and clothing with small pieces that can break off and pose a choking hazard, knit toys that have been found to contain needles, and infant and children’s furniture that, if not properly secured, can result in falls and other injuries.

“By reading the guide, families can ensure they do not have these recalled items in their homes, and can avoid purchasing them through yard sales or secondhand websites where they may still be available.”