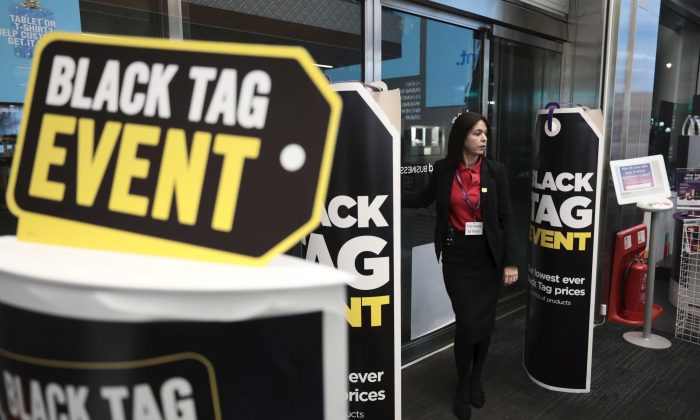 An employee prepares to open the shop doors in a Currys store on 'Black Friday' in the West End shopping district of London, England, Nov. 24, 2017. (Reuters/Simon Dawson)
UK

In the U.S. Black Friday is a big deal, with shoppers notoriously fighting over discounted televisions, stereos, and fridges.

The concept of the day was imported to the UK in 2010, but it hasn’t quite caught on yet.

A video posted on Friday, Nov. 24 shows electronics retailer Currys PC World opening the doors of its central London store to let in what they hoped would be throngs of customers.

Just one man can be strolling through the doors when they opened two hours early at 7 a.m. And that was to pick up a laptop he had pre-ordered.

Meanwhile, in the U.S.  every year there are reports of brawls over heavily discounted items.

That said, this year, some of the conflicts reported appear to be more of a personal nature than over sales.

In Missouri, a 19-year-old was seriously injured when a man allegedly fired his gun after attempting to place it in his holster. It wasn’t clear if the shooting was accidental or deliberate.

And in Birmingham, Al. there were reports of fights between girls in the Riverchase Galleria, reported al.com. The fights were personal, according to officers at the scene.

In the UK, some retailers are ambivalent about the benefits of Black Friday.

Anthony Thompson, chief executive of clothing brand Fat Face, told the BBC its stores would not be taking part.

“What customers are looking for at Christmas is great value for money, not make-believe promotions and fake prices, and that’s often what they get on Black Friday.

“All it’s doing is moving sales from December into November. It’s not growing the market and everyone is having to sell things at reduced margins.”

“I bet most retailers wish it was an American import that never arrived,” he said.