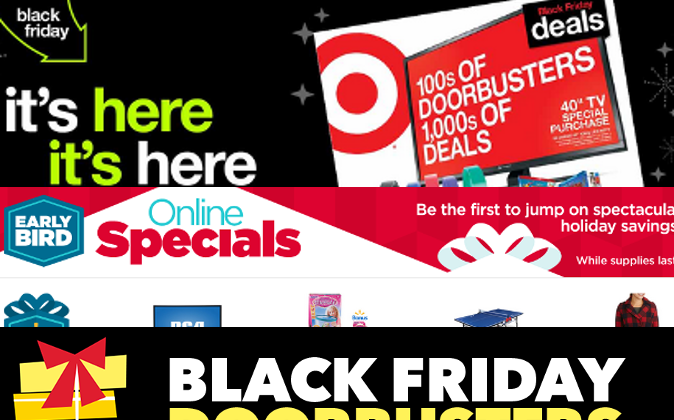 Black Friday 2014 Deals at Best Buy, Target, and Walmart: Here Are the Best Ones

Black Friday’s only two and a half weeks away. But that doesn’t mean you have to wait until then to find out what the best deals are at Best Buy, Target, and Walmart.

While Walmart has only so far published early specials that you can only get online, Target and Best Buy have released full-fledged Black Friday catalogs.

We painstakingly went through the ads and found the best Black Friday deals so you don’t have to. Keep reading for the best sales on Apple products, Beats headphones, smartphones, laptops, tablets, and gaming consoles that we could find.

If you didn’t think you could get an iPad for under $250, you’re in for a treat.

Walmart has the iPad Mini 16GB in Space Gray or White for only $239, with free shipping or store pickup.

The only drawbacks are that this is the first generation of the iPad (it was first released in 2012 and the third-generation iPad was released in October) and that it can only access Wi-Fi and won’t work on a cell or mobile network.

But if you, a family member, or a friend isn’t picky about having the latest and greatest technology, this iPad is a great deal at $239. Granted, it’s on the Apple Store for $249, but this might be the cheapest any iPad has ever been.

There aren’t any great iPhone or MacBook Air deals, but you should probably be waiting for the new and improved iPhone 7 and the new MacBook Air Retina, which might come out this year, anyway.

The S5 is the newest version of the flagship Samsung phone that runs Android.

You can’t get this phone online, though. You’ll have to go to a Target that has a Target Mobile center. You also may need to pay $40 to activate your line and, if you have to resort to it, early termination fees.

You can also get the LG G3 for (virtually) free ($1) at Best Buy. As with all deals of this kind, it requires a 2-year contract, but you can pick between using this Android phone on Verizon, AT&T, or Sprint. The phone, which critics have praised for its design and size, retails for $699.99.

Let’s face it: There aren’t that many deals for excellent laptops and tablets during Black Friday in the first place. It’s usually a hodgepodge of sales of low-quality machines that wouldn’t get sold in the first place. However, there were two deals that caught our eye, and they’re both at Best Buy.

If you want a lightweight laptop that does the bare minimum (and does it well) for cheap, go for the 11.6″ Acer Chromebook with 2GB memory for $149.

Best Buy and Target are offering identical Xbox One Console Bundles with Assassin’s Creed: Unity and Assassin’s Creed IV: Black Flag for $329.99. The combo was previously going for $399.