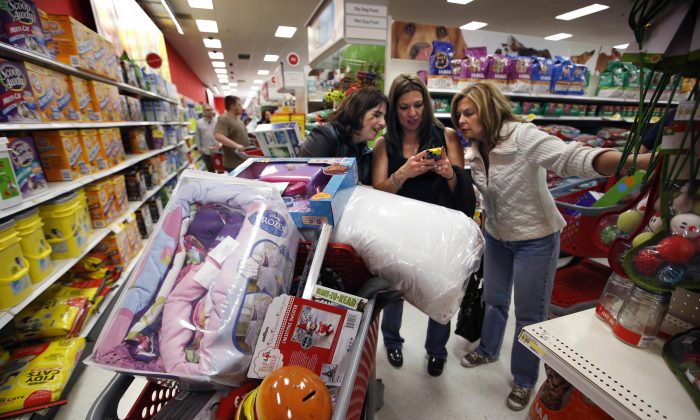 In this Nov. 28, 2014 file photo, Target shoppers Kelly Foley, left, Debbie Winslow, center, and Ann Rich use a smartphone to look at a competitor's prices while shopping shortly after midnight on Black Friday, in South Portland, Maine. Wal-Mart and Target, two of the biggest U.S. retailers, on Thursday, Oct. 29, 2015 rolled out plans to lure shoppers into stores during the holiday season by pushing discounts, free shipping and spiffed up stores. (AP Photo/Robert F. Bukaty, File)
US

Black Friday, the biggest shopping day of the year, will be here in just a few weeks.

Information about the huge annual shopping event is quickly emerging, including specifics about dates, times, deals, and sales.

Walmart hasn’t published its ad for this year yet, but last year’s ads showed deep discounts on electronics, toys, games, and more.

The retailer’s full shopping season started on November 1, but the best deals will start on Thanksgiving night and continue into Friday, November 28. The sales will include matching the price of any item people find for sale cheaper in other stores or online, and mobile check-in to speed up picking up items from the store.

Some of the deals that began on November 1:

Target has also not released its ad this year previewing the discounts for Black Friday, but deals last year included discounts on headphones, cameras, and televisions. It has released its toy book catalog.

The retailer also announced recently that its sales season would start on Sunday, November 1.

Deals include buy two, get one free on all video games starting on November 9; free shipping through December 25, and 50 percent off a selected toy each day from now until Christmas.

Amazon has entered the competition for customers this holiday season, announcing daily deals that started on November 1 with new specials continuing until Black Friday.

Deals for November 2, for instance, include:

In addition, Amazon Prime members will be able to access Lightning Deals 30 minutes before other customers.

Some of the specials planned for Black Friday include:

Newegg announced sales all month leading into Black Friday, with discounts on hundreds of products starting on November 1.

The online company says it will have “Short-term, massive price-cuts throughout Newegg.com, with many limited-quantity deals” on Black Friday itself.

There will also be specials on Monday, November 30–otherwise known as Cyber Monday.

Macy’s has published its ad for this year, which starts on Thanksgiving and continues into the next day and Saturday.

A few highlights are:

Many items store-wide will be 30 percent to 70 percent off.