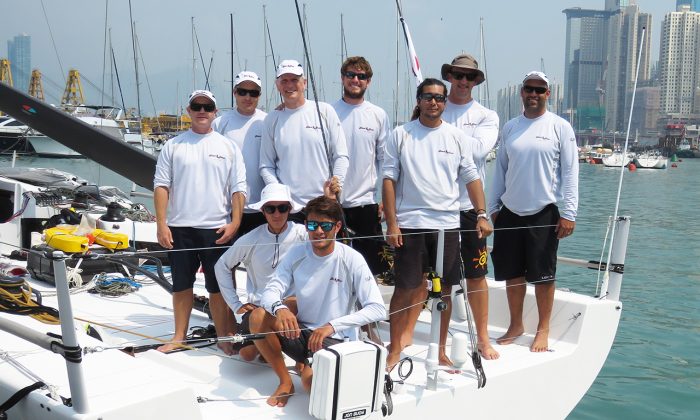 The crew of 'Black Baza' before the start of the Audi Hong Kong to Vietnam race on Thursday Oct 15, 2015. (RHKYC)
HK Sports

All 12 boats that set off from Hong Kong on Thursday Oct 15 competing in the Audi Hong Kong to Vietnam Race arrived in Nha Trang between early Saturday, Oct 17 and Monday morning Oct 19. Super maxi Ragamuffin was the first to arrive completing the 673 miles in 42 hours twenty minutes (42:17:24) and Avant Garde the last boat to dock took 93 and half hours to complete the trip.

“Alive” the winner of IRC Racing 0 category, was holding 1st place for the IRC overall prize for 12 hours with a corrected time of 79:04;47 before Black Baza came and snatched the title away, with an almost 2:30 hours better performance. Black Baza took a course away from the rest of the fleet and even changed sails to downgrade speed for safety and handling reasons, but still found herself travelling at over 20knots.

Phillip Turner/Duncan Hines’ “Alive” took the IRC Racer 0 prize ahead of Sam Chan’s FreeFire and Sydney Fischer’s “Ragamuffin 100”. Geoff Hill’s “Antipodes” came in 4th and a very happy crew of “ARK 323” finished the trip in just over 100 hours after its delayed start.

In IRC Racer 1, “Black Baza” won both on the water and on corrected time followed by “Ambush”, “EFG Mandrake”, “Zanzibar” and “Surfdude”.