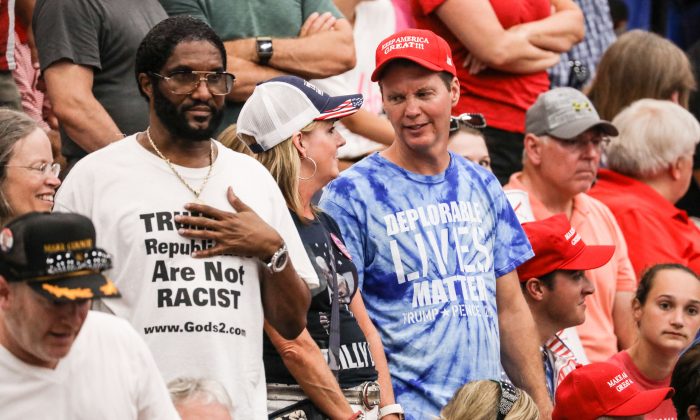 Approval of President Donald Trump among black likely voters has risen to 36 percent in a Rasmussen poll, apparently unaffected by allegations of racism from a former White House staffer.

That’s up from the 29 percent reported by Rasmussen two weeks ago. A year ago, that number stood at 19 percent.

The result of the daily tracking poll, released on Aug. 15, may indicate that black Americans aren’t buying into Omarosa Manigault Newman’s allegations of racism on the part of the president.

Among other things, Manigault Newman accused Trump of using a racial slur during the production of his reality television show “The Apprentice,” on which she used to work with Trump. The president, the White House, and multiple insiders have denied the claims.

Trump’s pitch to black Americans has centered around the promise of jobs. Partly due to Trump cutting taxes and eliminating regulations, the economy has been on a roll, with unemployment among blacks hovering around historical lows, a fact the administration has repeatedly highlighted.

“Since Election Day 2016, we have created 3.8 million new jobs. Unemployment for African-Americans, Hispanic-Americans, and Asian-Americans has reached an all-time low. America is back!” Vice President Mike Pence wrote on Twitter on Aug. 3

A Yougov poll from Aug. 11-13 showed Trump’s approval rating at 8 percent among blacks, up from 3 percent on Aug. 9. That result, however, wasn’t filtered down to likely voters. Among all registered voters, the approval was 45 percent in its latest poll.

Overall approval of Trump among likely voters remained steady at 49 percent, marking a slight increase from numbers around 46 percent in July.