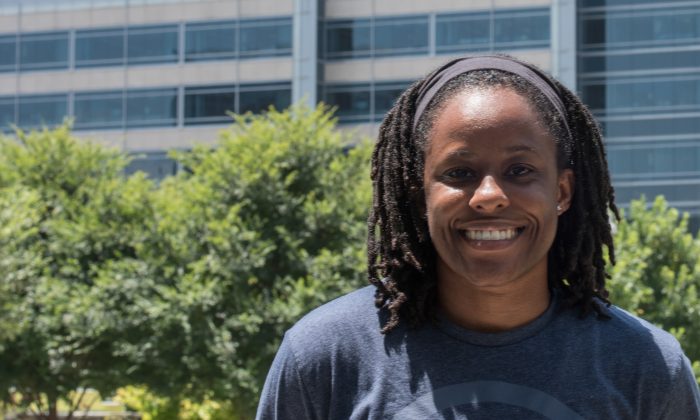 Chelsea Whitaker, former point guard from Baylor University and now a detective with the Dallas Police Department, poses for a portrait in Dallas on July 13, 2016. (AP Photo/Lisa Marie Pane)
US

Black and a Cop: Detective Says ‘We’ve All Got Work to Do’

DALLAS—In the aftermath of the deadly attack on Dallas officers, the city’s police chief issued an appeal to blacks: If you want to change law enforcement, join us. Apply to become a cop.

Chelsea Whitaker heeded that call nearly a decade ago, long before the fatal police shootings in Ferguson, Missouri, and North Charleston, South Carolina, and elsewhere that energized the Black Lives Matter movement.

Now she finds herself living in two worlds.

Whitaker is a police officer who’s been cursed at and attacked while making an arrest. She’s also a black woman who has faced the indignity of being asked if she belongs where she is, even while using the city’s gas pumps to fill up her department-issued vehicle.

In this era of distrust between blacks and police, Whitaker believes she has an opportunity to help bridge the divide.

“We’re all dominated by fears and our prejudices. We’ve got to do better,” she said. “We can’t just jump to ‘What this white person did is racist’ or ‘What this black person did is criminal.'”

In the days after the sniper slayings, Police Chief David Brown urged blacks to leave the protests and join the department to work for change from within.

Like most U.S. cities, the Dallas department has struggled to diversify its ranks. While the city is composed mostly of blacks and Hispanics, the police force is still dominated by whites, which make up about half of the department.

The police chief, a black man who rose through the ranks during a three-decade career, challenged protesters to be part of the solution.

“Serve your community. Don’t be a part of the problem,” he said. “We’re hiring. Get off of that protest line and put your application in.”

Serve your community. Don’t be a part of the problem.
— Police Chief David Brown

Whitaker, who turns 34 next week, is well known in Texas. A former point guard on the Baylor University squad that won the 2005 NCAA championship, she later played professionally in Israel and Turkey before returning to Texas and joining the department.

She’s now a detective in the criminal intelligence unit and attends law school. She comes from a family of public servants: Her brother and father work for the fire department. Her mother is a retired probation officer.

Since becoming an officer in 2007, she’s seen both ends of the spectrum. Many blacks who distrust officers based on years of harassment and excessive force are quick to view every police interaction as racist. Many white officers are fearful that crime or danger is just one stop away.

She’s found herself in the middle, trying to explain to black people that she and fellow officers aren’t all out to get them and insisting to white colleagues that many blacks, including herself, are stopped for no apparent reason and challenged about their activities.

When she first started patrolling, she was infuriated by people hurting each other, committing crimes or cursing her out when she was arresting them. She was trying to help, trying to take bad guys off the streets, and she was getting grief for doing her job.

But she started to think more about the circumstances that lead someone into a life of crime. She began to focus on the things she could do to be a mentor: talking regularly to a guy she had arrested and is now in jail, buying a meal for a girl who had been molested, bringing a teenager to Wal-Mart to get her personal hygiene products and teach her how to care for herself.

Her chief lamented the myriad of society’s ills that police are asked to handle—from loose dogs to single-parent households. All for about $44,000 a year.

As much as possible, Whitaker tries to explain that police are human too, and if they might be a bit rude or brusque, it’s not necessarily because of racism.

On the flip side, she tries to explain to white colleagues why blacks might be distrustful or fearful when encountering an officer. The long history of police targeting blacks for violence—and going unpunished—can’t be easily dismissed.

As a detective, she doesn’t wear a uniform. When she goes to the city gas pumps, she’s been questioned about where she works.

“Does he know that I work here? Yeah, he sees me using my ID to get (gas), and they still feel the need to ask me. And that happens more than once,” she said.

When she asks white co-workers how they might feel in the same situation, they say they would “absolutely lose it.”

“Well, you don’t experience that,” she said.

Americans’ opinions about policing are sharply divided along racial lines. In a nationwide poll last summer by the Associated Press-NORC Center for Public Affairs, 81 percent of black Americans said police are too quick to use deadly force, compared with 33 percent of whites. A third of blacks said they trust police to work in the best interest of the community, less than half the percentage of whites.

Whitaker has taken to Facebook to talk about police shootings, violence and race relations in lengthy posts that expand upon law and emotion. Her page has now more than 1,300 followers. Her mission is to be a messenger of peace.

“It takes courage for all of us to meet in the middle, and that’s hard to do,” she said. “Perception is everything.”