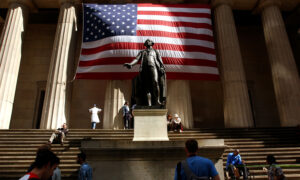 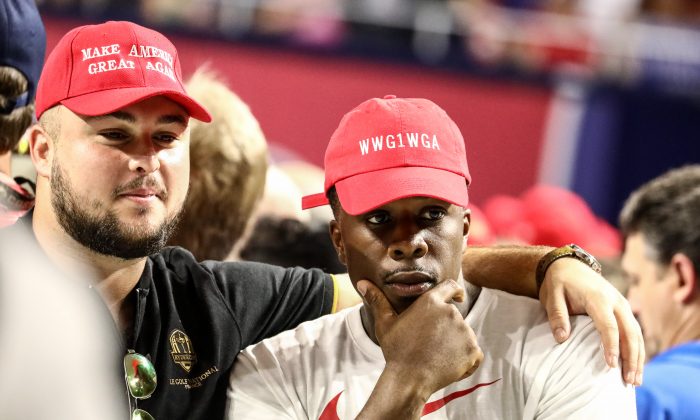 Increasingly more black Americans say they approve of the job President Donald Trump is doing, according to Rasmussen polls.

Trump has gained the approval of 35 percent of black likely voters, according to a daily update released by the pollster on Oct. 4.

Rasmussen typically posts results that are more favorable to Republicans than other pollsters, but even compared to its own numbers, Trump has been garnering more support in the black community.

Reuters/Ipsos polls have showed a more moderate improvement, to about 15 percent approval among blacks (polled Sept. 28 to Oct. 2), from about 11 percent a month earlier (Aug. 24 to Aug. 31)

So far, things are going his way on several crucial metrics.

Black people have been enjoying the lowest unemployment ever, based on government data reaching back to 1972.

Also, violent crime slightly declined in 2017 after two years of increases. While the murder rate dropped by less than 1 percent, it contrasted with the jump seen in the two previous years of more than 20 percent in total. The last two-year period that the homicide rate had soared so dramatically was between 1966 and 1968.

Trump has also framed illegal immigration as a civil-rights issue, pointing out that an influx of cheap labor from abroad hurts black communities the most. Black people, on average, have less education, making it harder for them to compete with illegal immigrants for jobs.

In April, Trump signed an executive order to make changes to welfare. One of the points is to “promote strong social networks as a way of sustainably escaping poverty (including through work and marriage).”

The breakdown of family has been extensively linked with poverty and child delinquency, regardless of race. But the black community, in which some 70 percent of children are born out of wedlock, has especially seen the plight of single parenthood. Some 80 percent of all long-term child poverty concentrates in single-parent homes, according to the Heritage Foundation, a conservative think tank.

Convincing black Americans to give his policies a chance could help Trump buoy Republican candidates in the Nov. 6 midterm elections.

Voters will get a chance to reshape the House of Representatives, where Republicans currently hold 235 seats, compared with 193 for the Democrats. Ballots will also be cast on 35 Senate seats—23 held by Democrats, two by independents allied with Democrats, and eight by Republicans.

Republicans need to keep majorities in both chambers to keep rolling out the Trump agenda, making the often overlooked midterms a referendum of sorts on Trump himself. Democrats have focused intensely on blocking Trump’s agenda, but that time and effort has come at the expense of communicating any competing agenda, a factor the president is capitalizing on.

“So if African-American unemployment is now at the lowest number in history, median income the highest, and you then add all of the other things I have done, how do Democrats, who have done NOTHING for African-Americans but TALK, win the Black Vote?” Trump wrote in a Sept. 30 tweet. “And it will only get better!”

The Destruction of Civilized Debate