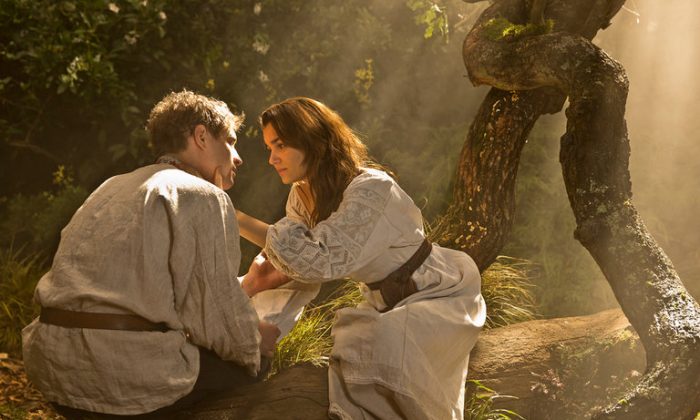 When longtime director George Mendeluk was approached with a story that would be set in Ukraine in the early 1930s, he was both honored and excited because of his personal connection to that time.

The connection was with the era of Josef Stalin’s Holodomor—extermination by famine—which Mendeluk’s mother suffered under, and ultimately escaped.

He remembers his mother recounting how she and her best friend would walk to school in Kharkiv, the former capital of Ukraine, and pass children on the street begging for bread. “On the way back from school, they’d often see those same children, who had been alive in the morning begging for food, dead—corpses in the street,” Mendeluk said. “She also told me how her best friend died—they were in a classroom together.”

“When you’re in the final stages of death, you become bloated, as her best friend was, and water just flowed from her; she collapsed dead in the seat in front of her,” Mendeluk said. “That memory was seared in my brain. I just couldn’t believe the inhumanity that anybody could perpetrate for a political cause.”

Ukraine, sometimes called “the breadbasket of Europe,” was a fertile nation of expressive people who wanted nothing to do with the collectivism and communism Stalin sought to impose on it, and the Ukrainians had fought back with spirit. So in retaliation, between 1932 and 1933, Stalin ordered that the grain be taken away from the people as quickly as they could harvest it. He also made sure any talk of famine was brought to an end. It wasn’t until 1991, with the fall of the Soviet Union and the release of many archives, that the truth of his actions were revealed to the world. But even now the story of the 7 million to 10 million deaths is not widely known.

“I never thought that I would have the opportunity to actually express this, which is one of the darkest secrets of the world,” said Mendeluk, who has worked on over 70 films and over 300 hours of television.
Now, with the recent release of his film “Bitter Harvest,” Mendeluk hopes this dark chapter of humanity will no longer be secret.

Mendeluk was approached by Richard Bachynsky‑Hoover, an actor he had worked with some years ago, who had written his first screenplay—a story set during the Holodomor.

Mendeluk worked with the first-time screenwriter on this script to craft what he says is first and foremost a love story. The tragedy in Ukraine is seen through the eyes of childhood sweethearts trying to make their way back to each other. The hero, Yuri (played by Max Irons), is a painter who, through his journey in the film, becomes a warrior. The harsh reality surrounding the characters is interspersed, or mixes head on, with dreamy sequences.

Arts and culture are an important part of the story and are ever present in the movie. Filming on location in Ukraine, Mendeluk said, “I got to know the Ukrainian spirit and soul, how they loved art, singing, and dancing.”

It was also a haunting experience, he said. They shot in Pyrohiv, which was once a village south of Kyiv, in an open air museum and in cottages over a century old that sometimes gave him a ghostly feeling.

“It was reconnecting to my roots,” Mendeluk said. While filming, he could envision the stories of his mother, Eugenia, and father, Ivan Mendeluk, who was the director of the Stanislavsky Dance and Opera Ensemble, meeting, being separated, and making their way to refugee camps.

As Mendeluk was filming, the story quickly became increasingly relevant to the present. Days after production began, demonstrations broke out in Ukraine over the conflict with Russia. By the time they returned to Ukraine to finish shooting the last portions of the movie, the tensions had broken out into war. It reminded Mendeluk, and he hopes it will remind viewers, that this is a story humanity should heed.

“[This history] will ultimately impact the rest of the world if we don’t stand up to tyranny,” Mendeluk said. But he did not want to make a documentary, and he did not want to be heavy-handed with tragedy or a history lesson. Mendeluk wanted to shine a light.

“The theme of the film, overarchingly, is love conquers and transcends even the worst acts committed by humanity. Love has this transcendental power.” Mendeluk had a quote by Martin Luther King Jr. in mind: “Darkness cannot drive out darkness; only light can do that. Hate cannot drive out hate; only love can do that.”

“We wanted to shine a light—as film is projected on a screen—on this horrible event, so people could know it for what it was, those affected and those involved in it, and move on. And heal. And hope that never happens again,” Mendeluk said.