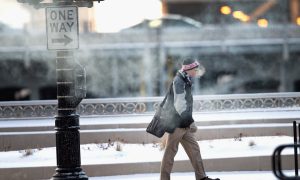 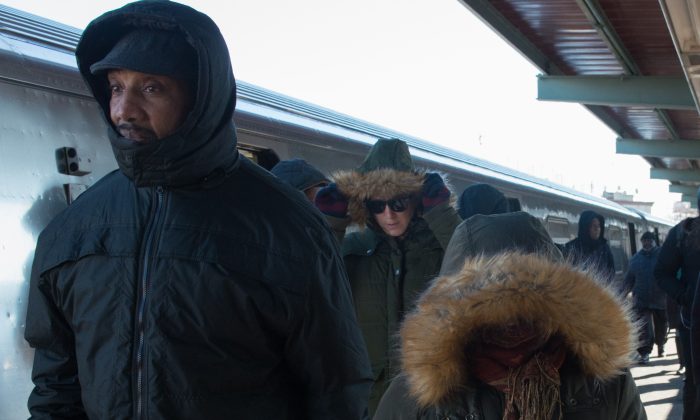 People exit a subway train during an arctic chill that brought frigid temperatures on Feb. 14, 2016 in the Brooklyn borough of New York City. (Stephanie Keith/Getty Images)
US

NEW YORK— The bitter cold was replaced by snow, sleet and rain Monday in the mid-Atlantic states and the South, but many residents were able to hunker down at home with federal offices and many businesses closed for Washington’s Birthday.

After much of the Northeast experienced record cold on Valentine’s Day, the National Weather Service said it would be snowy in many areas before sleet or freezing rain started and rain finally arrived.

Washington Mayor Muriel Bowser said she deployed the D.C. snow team ahead of the storm, which is expected to deliver a sloppy mix of snow, sleet and rain. One to 3 inches is forecast for Monday.

Outside the nation’s capital, the Virginia Department of Transportation staged nearly 2,500 trucks to treat and clear roads.

By early afternoon, snow was falling in Washington and Philadelphia, and flurries could be seen in New York City.

Meteorologist Bruce Sullivan said there could be significant snowfall — 4 to 8 inches — in eastern Ohio, western Pennsylvania and western New York. Some mountainous areas could get even more snow.

The weather could have less of an impact because schools and many workplaces will be closed for the federal holiday, and traffic should be lighter than usual.

In Virginia, the state police asked motorists to delay any unnecessary travel until weather conditions could improve. Traffic crashes claimed at least one life, and nearly two dozen disabled vehicles were reported across Virginia.

In North Carolina, light freezing rain, sleet and snow caused wrecks and closed schools and businesses. The National Weather Service said the precipitation was light Monday morning, but with temperatures in the 20s, it was freezing immediately on bridges, roads and other surfaces.

By Tuesday, when temperatures get higher, the rain and some runoff could cause flooding in some areas, Sullivan said.

Sunday’s teeth-chattering temperatures were some of the coldest on record.

From New York and Boston to Providence, Rhode Island, and Hartford, Connecticut, temperatures on Sunday morning dipped to as low as minus 40 — on Mount Washington in New Hampshire.

The National Weather Service said the temperature in New York City’s Central Park fell to minus 1, a record low for the date. The last time it was below zero in Central Park was in January 1994.

In Montpelier, Vermont, the overnight temperature hit minus 19, tying a record set in 2003. And South Lincoln, Vermont, recorded 27 below zero.

Temperatures were so low in some spots, utilities were knocked out. A frozen regulator left about 400 customers in Connecticut without natural gas service, and officials believe extreme cold in Vermont broke a utility pole, knocking out service to about 1,500.

An emergency generator didn’t kick in for Sheffield Selectboard Chairman Walter Smith, who said he lost a greenhouse full of about 500 orchids.

On Sunday, officials were concerned by the cold they said was dangerous and could be fatal to those spending too much time outdoors — especially the homeless.

Outreach teams brought 105 people into New York shelters, and 288 showed up at hospitals and health facilities, including more than 20 who were brought in for care needed immediately, New York Mayor Bill de Blasio said.