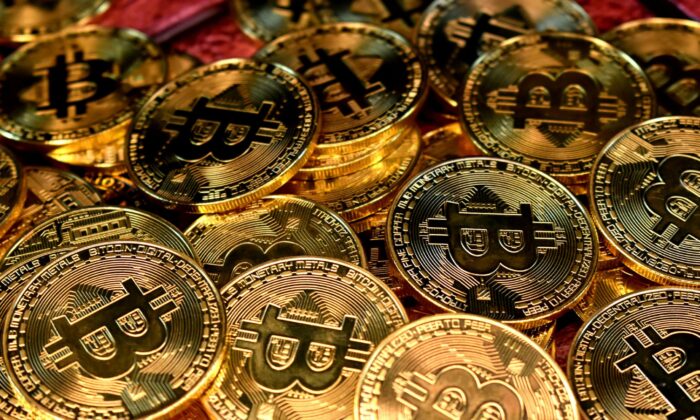 'Sound money is produced by work, not brrr'
By Nathan Worcester

Peter St. Onge, an economist with the Heritage Foundation, voiced agreement with the letter in an interview with The Epoch Times.

“As someone who is pro #bitcoin and cares about the environment, I urge you to read this letter that separates fact from fiction on bitcoin mining’s impact on the environment for U.S. miners,” wrote Suarez, whose city has emerged as a burgeoning tech hub at a time when Silicon Valley’s population is shrinking.

“The rapidly expanding cryptocurrency industry needs to be held accountable to ensure it operates in a sustainable and just manner to protect communities,” they wrote.

The House Democrats warned that bitcoin mining is “having an outsized contribution [sic] to greenhouse gas emissions,” an assertion the bitcoiners strongly disputed.

“Miners can operate from anywhere in the world, and datacenters are able to target stranded or abundant renewable sources of energy.”

While Democrats have claimed that bitcoin mining generates more than 30,000 tons of electronic waste every year, the bitcoin advocates challenged the paper they cited, which assumed that the mining hardware bitcoiners use depreciates in a mere 1.3 years.

“The claim that Bitcoin miners produce enormous quantities of e-waste is a purely academic fantasy,” the bitcoiners wrote.

Democrats also took issue with the proof-of-work (PoW) method for validating transactions used by Bitcoin and many other cryptocurrencies because of its heavy energy use.

One source, the Cambridge Centre for Alternative Finance, estimated bitcoin electricity consumption at 151.81 terawatt-hours (TWh) per year, within a possible range of 57.13 to 343.75 TWh annually. That’s on par with what the nation of Poland uses every year.

“Less energy-intensive cryptocurrency mining technologies, such as ‘Proof-of-Stake’ (PoS), are available and have 99.99 percent lower energy demands than PoW to validate transactions,” the House Democrats wrote.

The bitcoiners claimed that direct comparisons between PoS and PoW are “highly misleading,” as the two systems are different in kind—while PoW allows a miner to collect bitcoin if they solve a mathematical puzzle faster than all others attempting to solve it, PoS grants mining power based on how many coins a user can stake.

“Systems like Paypal or Venmo also use very limited amounts of energy, but these are not more ‘efficient’ than Bitcoin because they provide users with completely different assurances. Proof of Stake systems should be understood in the same way,” they wrote.

The bitcoin advocates also said “the risk of corporate capture is extreme in Proof of Stake systems,” as such cryptocurrencies effectively favor miners who have more coins—a view shared by St. Onge.

“You would not want to force the American public into using a PoS coin because almost certainly, it would be owned by one guy or a couple of guys. It would be a plutocracy,” he told The Epoch Times.

St. Onge agreed that politicians could support such a system if it allowed them to reinsert themselves as the authorities responsible for redistributing digital assets.

“This is an excellent way for the existing elite to transpose their domination into the next stage,” he said.

Stephen Barbour, a signatory of the May 2 letter, told The Epoch Times that “PoS is simply central banking-style governance; it’s dead out of the gate.”

He was equally dismissive of central bank digital currencies (CBDC), a class of digital asset that Biden contemplated in his recent cryptocurrency EO. Other countries around the world, including China, have been planning or piloting CBDCs.

“CBDCs is social justice money. I support PoW only. Sound money is produced by work, not by brrr,” Barbour told The Epoch Times.