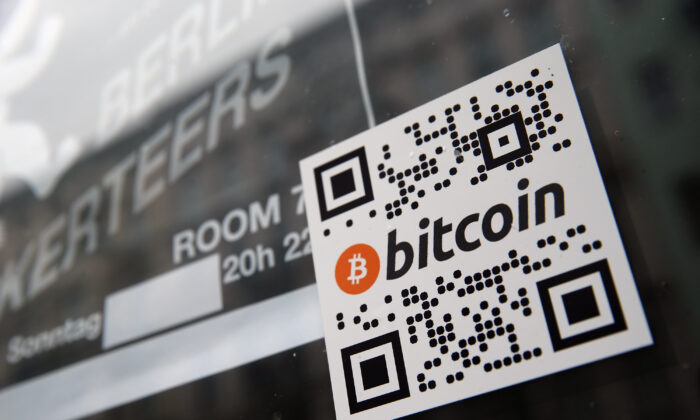 A sticker on the window of a local pub indicates the acceptance of Bitcoins for payment, in Berlin, Germany, on April 11, 2013. (Sean Gallup/Getty Images)
Markets

The world’s most famous cryptocurrency topped $35,000 late Jan. 5, setting a new all-time high as part of an extended upswing.

Bitcoin is a form of currency that was established in 2009. Using a decentralized form of verification that relies on nodes distributed around the world, the system records all transactions in a ledger that can be viewed publicly.

Bitcoin is the most well-known cryptocurrency. Cryptocurrencies are digital assets used to purchase goods and services that are secured by cryptography, making it difficult to forge transactions and enabling widespread adoption.

Users can hold bitcoin, or portions of a bitcoin, online on exchanges, on their computers, or on so-called wallets offline.

Derided by mainstream economists and investors for years, bitcoin has increasingly won over larger firms and analysts, who are pouring money and resources into investing in and promoting the currency.

MicroStrategy, for instance, last month announced it had bought nearly 30,000 bitcoins for about $650 million, upping its holdings to more than 70,000 bitcoins purchased for approximately $1.1 billion.

“The acquisition of additional bitcoins announced today reaffirms our belief that bitcoin, as the world’s most widely-adopted cryptocurrency, is a dependable store of value,” Michael Saylor, CEO of the company, said in a statement.

The price of a single bitcoin has been on an extended upswing swing since dipping below $3,200 in December 2018.

The upswing hasn’t appeared to be affected by new proposed regulations unveiled in December by the Treasury Department that would require banks and money service businesses to keep records and verify the identity of customers using cryptocurrency to transact.

Brian Armstrong, the CEO of Coinbase, a cryptocurrency exchange, said the rules would have “unintended side effects,” calling it “impractical to collect identifying information on a recipient in the cryptoeconomy.”

The Office of the Comptroller of the Currency, meanwhile, on Jan. 4 published a letter saying banks and federal savings associations can use stablecoins, or cryptocurrencies meant to be less volatile than bitcoin and its brethren, to conduct payments and other functions.

“Our letter removes any legal uncertainty about the authority of banks to connect to blockchains as validator nodes and thereby transact stablecoin payments on behalf of customers who are increasingly demanding the speed, efficiency, interoperability, and low cost associated with these products,” Acting Comptroller of the Currency Brian Brooks said in a statement.