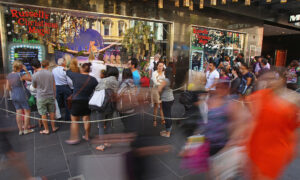 Bitcoin Gets a Software Upgrade

After a spectacular run up to $3,000, bitcoin prices have been choppy, falling as low as $1,830 in mid-July. But the announcement of a software upgrade called Segregated Witness (SegWit) caused prices to rally more than $1,000 in just a few days.

The Epoch Times: It looks like bitcoin is getting a major upgrade with SegWit. Can you explain?

Trace Mayer: SegWit lays the platform for bitcoin to scale and it also lays a big platform for extensibility. We’re going to be able to do all types of things because it is also a fix for something called transaction malleability. By fixing a lot of these things with SegWit, bitcoin is just going to be so much more. It’s a really, really big upgrade.

At the end of the day, it has been very good because it helps bitcoin become even stronger and more resistant to censorship.
— Trace Mayer, bitcoin investor

The Epoch Times: Why did it take so long?

Mr. Mayer: It’s been two years in the making. If we had something like a Facebook or a Google, and let’s say that that you only needed 5 percent of the voting shares in order to completely stop any future growth or development of the company, well, guess what would happen.

So in the boardrooms, you fight all the time. With proxy voting, you can have control of some of these very large corporations and get stuff done with inactive votes or people abstaining. But with bitcoin, when you want to change something, you have to actively get a very large chunk of votes.

You have to get votes from users who are using the wallet software. You have to get votes from the miners who are processing transactions in blocks. You have to have a super majority from everybody in order to maintain distributive consensus, or you’ll have what’s called “a fork” or a split of the blockchain. So anybody with even a very small percentage can exercise a veto. Bitcoin has a whole different type of governance than a normal company.

If you want to move upgrades forward, you have to have super majority consensus from millions of people, and that’s a hard thing to achieve. So with SegWit finally looking like it’s going to activate, bitcoin’s rising up to a whole new level, because it’s being upgraded in terms of scale and extensibility.

And I think that’s being reflected in the price, because it’s going to have so many more use cases in the future. So investors who are buying and holding it today are looking at this saying: “The uncertainty about the path of bitcoin going forward is getting cleared up. Therefore, we’ll buy and hold it, because it’ll be so much more useful in the future.”

The Epoch Times: But you say this is not a done deal yet.

Mr. Mayer: Right. We’re not out of the woods yet. We’ve only locked in what’s called BIP 91 [the miners’ version of SegWit, which includes a potential block size increase]. We have another couple hundred bitcoin blocks before we start enforcing BIP 91, and miners will be the ones enforcing that.

And then even after that gets enforced, we need two weeks in order for BIP 141 [which includes SegWit but no increase to the block size] to be activated. And then we have another two weeks before we actually start enforcing that. So the earliest time SegWit could be active and functioning on the network is mid-August.

Miners could be liars. They’ve proven that in the past when they have signaled falsely. So you get all types of Machiavellian games. But it does appear that we’ve gotten consensus.

People are starting to signal they are going for SegWit, and people are relying on that. It’s really not in the miners’ best interest to disrupt this process any more than they already have. They stand to lose the most money because they’re the only ones who have to actively choose which fork to follow. Everybody else can just sit and hold and see how it plays out but doesn’t have to make an economic choice.

The Epoch Times: Aren’t the miners just service providers for the users?

Mr. Mayer: The work they do has value because individuals and users of bitcoin place value on that work. If miners do work that users do not value, then miners will lose a lot of money in the process. And then they won’t be miners anymore because they’ll go bankrupt.

Miners can’t fire anybody. The people who hire and fire are the people who hold bitcoin and who use bitcoin. The way they determine who they’re going to hire or fire is based on what software they run. And 99.1 percent of the people who interact with the bitcoin network are using the bitcoin core software because it’s the safest, the most reliable, and the most secure.

But these miners think they can top-down authoritarian control bitcoin because the work they do provides value either way. What they’ve found is that the more they try to squeeze their grip on the bitcoin community, the more they’re just grasping at air.

Users and consumers should presume as a fundamental premise that miners are hostile and malicious to bitcoin users and consumers. They’re not to be trusted. They’re a rattlesnake to be on your highest guard against.

Bitcoin’s been very much an open-source community project where there’s been a lot of good will. People have presumed that other people are acting with good intentions, that they have bitcoin’s best interest at heart. It’s been very collegial.

But this two-year-long debate around SegWit revealed that these miners are not to be trusted. This sets up a whole different type of game theory in the way that you interact with other people in the ecosystem. The miners burned their bridges with a lot of people in the bitcoin community.

At the end of the day, it has been very good because it helps bitcoin become even stronger and more resistant to censorship. You can think of it like the body getting a nasty cold or flu. It’s not any fun while you have it, but if it doesn’t kill you, it makes you stronger, because you increase your immune system and your ability to respond.

The Epoch Times: What’s your opinion on some of the other coins in the space?

Mr. Mayer: None of them really have a good, decentralized, peer-to-peer, censorship-resistant, scalable, liquid, secure way of protecting and storing value. And that’s why bitcoin is king of the mountain.

That’s not to say that there isn’t a lot of fun going on and that you can’t make a lot of money with these altcoins. We have a lot of really cool projects going on and a lot of fun tech, but don’t pretend that you’ve got the security, the liquidity, and the scalability that bitcoin has. Nobody is even close.

The Epoch Times: What do you think is going to happen to the price in the near future?

Mr. Mayer: I think we’re going to continue seeing turbulence. I think between now and probably the end of the year, after the November decision on 2x, the issues will get definitively resolved.

Then I think the price is going to be significantly higher. You never know, of course—bitcoin’s always wild and crazy—but the thing is, it just might actually turn into something, so perhaps, you should acquire a little bit of it.

And that’s really what people have to do. They have to develop their own human capital to learn how to buy bitcoin, sell bitcoin, and secure bitcoin. And even if you’re doing this with just $50 or $100, you’re getting the technical literacy.

So if you wanted to move larger amounts in, you could confidently do it without losing your money. All of that takes time, diligence, and hard work for people to do, which is why we see these waves of adoption and usage happening—which means that there’s going to be lots of upside potential with bitcoin for many, many years to come.