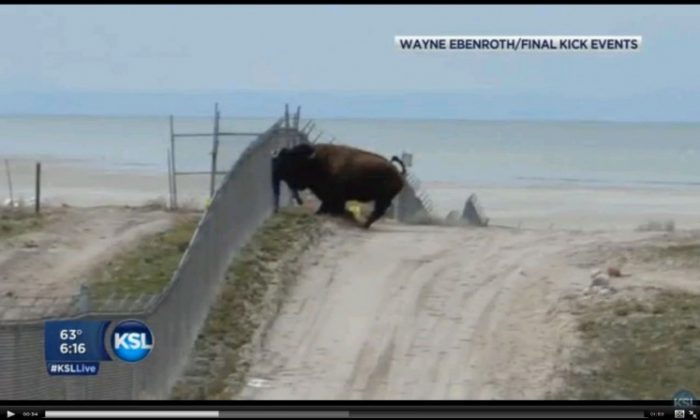 A screenshot of KSL shows the bison slamming the man. He walked away from the attack. (Screenshot via The Epoch Times)
US

A bison attacked a man in Utah, smashing him into a fence. Bison, also known as buffalos, are the largest wild animals in North America, weighing more than a ton. It’s best to stay in a car when viewing bison, warn experts.

Andrew Evans, of WheresAndrewTV on You Tube and National Geographic’s digital nomad, posted the following video on You Tube in 2012.

Evans said that the adult bison male can weigh more than a ton, adding that they could roll a car if they wanted to. Being in Yellowstone National Park is like being on a safari, as wild animals are everywhere, he said. Animals in Yellowstone can be small, like the chipmunk, or large, like the moose, which weighs over 800 pounds.

“A lot of visitors got out of their cars, got as close as they could to the animals, but they’re crazy,” he said. He said he prefers to stay in the safety of his car.

According to the National Park Service (NPS) of Yellowstone website, more than 3,000 bison roam the grasslands of Yellowstone National Park in a typical year. “Bulls are more massive in appearance than cows, and more bearded. For their size, bison are agile and quick, capable of speeds in excess of 30 mph,” it states. “Each year, bison injure park visitors who approach too closely,”

The recent attack was on Antelope Island State Park, the largest island in the Great Salt Lake. The park is in Utah, where roughly 500 bison free-roam, and share the land with bighorn sheep, mule deer, pronghorn, coyote, and a wide variety of birds, according to the park’s website.

An annual “Bison Roundup” is held each fall to check the health of the bison herd and cull excess bison, it states.