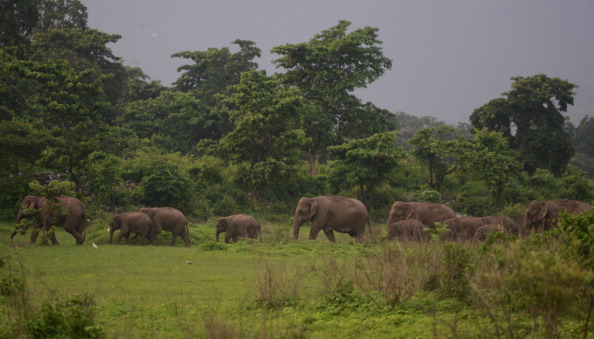 A herd of wild elephants files through woodland near the Kolabari village in Naxalbari, some 50 kms from Siliguri on June 13, 2014. (Diptendu Dutta/AFP/Getty Images)
News

The continual decline in the population of a species poses a major threat to biodiversity. On the flip side, the unhindered and rapid multiplication of species also brings forth its own set of problems. It is this rise in the population of the elephants in West Bengal that has led to increased man-animal conflict, say forest officials and now in order to resolve the issue peacefully, they plan to adopt a birth control method successfully implemented in South Africa to control the ever-growing elephant population there.

N.C Bahuguna, the principal chief conservator of forests and head of forest informed that the population of elephants in Northen parts of West Bengal has increased from about 150 in the 1980s to more than 500 currently. This has led to serious man-animal conflict causing them to consider starting immuno-contraception, something that South Africa has already adapted.

West Bengal has about 11, 879 sq kms of forest area. More than a third of this forest area is the habitat of elephants. In Northern Bengal, their habitat comprises of the Terai-Dooars area, that is Jalpaiguri, Darjeeling and Alipurduar districts and in Southern West Bengal, Bankura, Purulia, West Midnapore form their primary habitat. Several inter-state and inter-country elephant corridors pass through Northern and Southern Bengal. Overall the population of elephants in Bengal is estimated to be around 700 with Northern Bengal being home to about 500 of them.

Man versus the wild

The man-animal conflict level in Bengal has reached extremely high levels owing to the unprecedented increase in pachyderm population and developmental activities of humans. Trampling accidents by elephants alone are responsible for at least 75 deaths averagely in a year.  Official estimates show that 67 people met their death in Bengal due to elephants in 2011-2012.

Urbanization, development of infrastructure and fragmentation of habitat due to construction activities have aggravated the problem even more. West Bengal ranks second in the death of elephants caused by railway sector. This equals to approximately 28 percent of elephant deaths in the country on account of collision with trains. Records show that more than 50 elephants have been run over by speeding trains during the last decade.

This year in July itself, a tribal woman from Jalpaiguri district was crushed to death in the forest by an elephant and two elephants were run over by a train speeding through Buxa Tiger Reserve and also in North Bengal.

Elephants are rapidly losing their homes too because of expanding human habitat.

In Northern Bengal, the natural corridors that the elephants use have been disturbed by infrastructural activities. This environmental disturbance in combination with the increase in elephant population has led to increased man-animal conflict.

In Southern Bengal, the reason for conflict is not the same. The forests of Southern Bengal have been seasonal homes to the elephants migrating from Jharkhand, Bihar and Odisha. But recently, the habitats in their native lands have been destroyed because of which they have not returned to their residential territory and stayed back in Southern Bengal forests. This has caused increase in their population in South Bengal again leading to conflict with humans.

In search of a solution

The solution for controlling the population of the Elephant is not easy to arrive at as it is a Schedule 1 animal and is protected under the Wildlife Protection Act.

In the immuno-contraception birth control method being considered, the female elephant will be darted making her temporarily infertile for a year. This process can be repeated year after year as required. South African Wildlife Reserves have applied this method and have been very successful in regulating the population of pachyderms.

However, as popular animal conservationist Belinda Wright has pointed out, proper study and trials need to be done before implementing the same process in our country as the Elephant is an endangered species. Enough data and technical support will be required before putting this solution to work.

In another part of India, the rise in elephant-human conflict has been resolved in a novel way. Read the story here.

This story was originally written and published by Shilpi Gemawat, a contributing writer for indiasendangered.com. For the original article and more information, please click HERE.