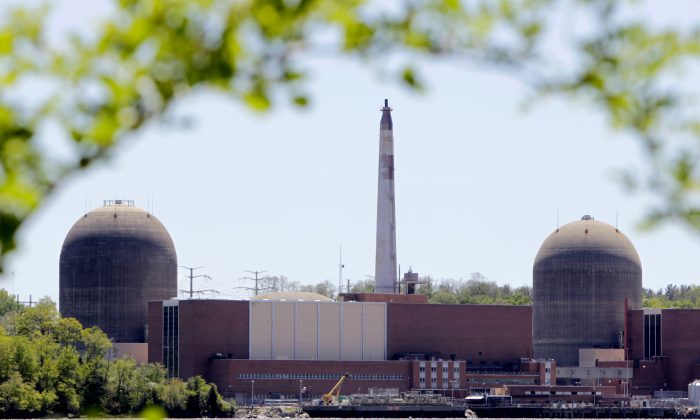 The nuclear power plant at Indian Point in Buchanan, N.Y., is seen with the Hudson River in the foreground. (AP Photo/Seth Wenig, File)
US

ALBANY, N.Y.—Bird poop was the likely cause of a December shutdown at a nuclear power plant outside New York City, according to the operator.

In a report to the Nuclear Regulatory Commission last month, the New Orleans-based company said the automatic reactor shutdown was apparently from bird feces that caused an electric arc between wires on a feeder line at a transmission tower.

“If it has nowhere to send its electricity, the generator senses that and automatically shuts down,” Entergy spokesman Jerry Nappi said.

Plant managers told the NRC they were revising preventive maintenance for additional inspection and cleaning and installing bird guards on transmission towers.

Nappi said he couldn’t recall a similar incident in the past several years from birds at Indian Point, which is located along the Hudson River north of New York City. He didn’t immediately know whether a carcass was found nearby or what type of bird was suspected.

Nuclear Regulatory Commission spokesman Eliot Brenner said it’s not uncommon for wildlife to trigger electrical outages on transmission lines regardless of the generation source of the electricity. “Squirrels are the biggest offenders,” he said.

He didn’t know if the NRC was specifically tracking animal-related reactor outages. “They’re kind of few and far between, but they’re not uncommon,” he said.