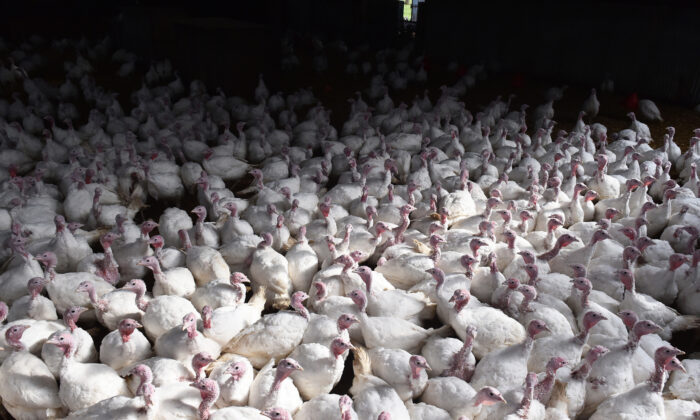 DES MOINES, Iowa—Officials announced Monday that they have identified bird flu in a commercial flock of 50,000 turkeys in northwest Iowa, the state’s second case of a virus that has been identified in multiple U.S. states.

Iowa agriculture officials and the U.S. Department of Agriculture confirmed the case in Buena Vista County, about 100 miles north of the case identified March 1 in a backyard flock of 42 ducks and chickens in Pottawattamie County.

Gov. Kim Reynolds signed a disaster proclamation for Buena Vista County to allow state resources to help with disposal of the affected flock and disinfection of the farm. Officials didn’t immediately disclose the number of birds involved. The emergency declaration also provides resources for tracking, monitoring and the rapid detection of bird flu.

The turkeys have been killed and disposed of on the farm. A 6.2-mile control area has been established to limit traffic in and out of the area while extensive testing is done to ensure no other cases, said State Veterinarian Dr. Jeff Kaisand. He said five other commercial farms are within the zone and 37 backyard flocks.

Iowa Secretary of Agriculture Mike Naig said in a statement that state and federal agriculture officials are working with producers “to trace back, control, and eradicate this disease from our state.”

Naig told reporters that if the virus spreads significantly into commercial egg, chicken, or turkey populations, then consumer prices and product availability could become an issue. Cases have been reported in at least 12 states in backyard flocks and commercial production houses.

“We’re not seeing a massive outbreak on a large scale and so I think it’s too soon to be concerned about food impact or pricing impact at this point, but you have to acknowledge that can be an issue over time,” he said.

Avian influenza is an airborne respiratory virus that spreads easily among chickens through nasal and eye secretions, as well as manure. The virus can spread from flock to flock by wild birds, through contact with infected poultry, by equipment, and on the clothing and shoes of caretakers.

The U.S. Centers for Disease Control and Prevention said the recent bird flu detections do not present an immediate public health concern. No human cases of these avian influenza viruses have been detected in the United States. While it can be transmitted to humans, it is unusual and typically due to close contact with infected birds.

The first infection this year was identified in a commercial flock of turkeys in Indiana on Feb. 9. Since then, five additional flocks have been found with cases in Indiana, where more than 171,000 birds have been killed and removed. The virus also was detected in a flocks of turkeys and broiler chickens in Kentucky last month, resulting in the destruction and disposal of more than 284,000 birds. A commercial chicken flock in Delaware also was infected, leading to the disposal of 1.2 million birds, the USDA said.

In the past few days officials have identified the virus on a southeast Missouri farm with 240,000 broiler chickens, a commercial mixed species flock in southeastern South Dakota and an egg-laying hen operation in northeast Maryland.

On Monday, Nebraska officials confirmed the state’s first known discovery of the virus this year, in a wild goose near Holmes Lake in Lincoln.