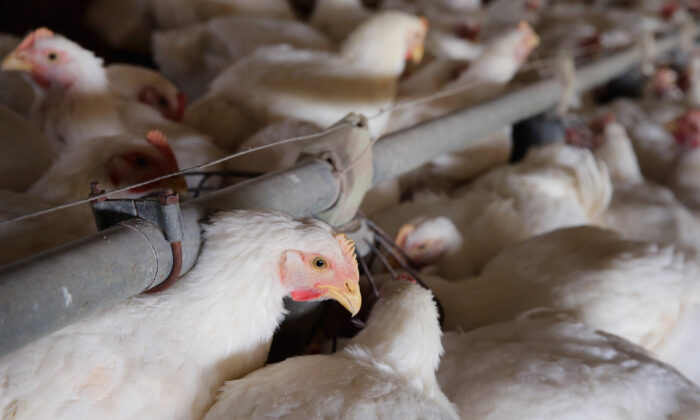 Chickens gather around a feeder at a farm in Osage, Iowa, on Aug. 9, 2014. (Scott Olson/Getty Images)
US

The U.S. Department of Agriculture (USDA) has confirmed cases of the highly pathogenic avian influenza (HPAI) in five more states across the country after officials warned that the recent outbreaks could see Americans paying more for poultry.

HPAI, also known as “bird flu,” is a highly contagious viral disease that mainly affects birds, although it has been discovered in other animals such as pigs and dogs in China, Indonesia, and Vietnam, as well as domestic cats in Germany, according to the Centers for Disease Control and Prevention (CDC).

It spreads easily among birds through nasal and eye secretions, as well as manure, and it can prove deadly in domestic poultry.

APHIS said it is “working closely with state animal health officials” on a joint response.

Meanwhile, the affected areas have been quarantined and birds on the properties will be depopulated to prevent the spread of the disease. Birds from the infected flocks will not enter the food system, officials said.

These latest cases were detected just days after the Nebraska Department of Agriculture (NDA) announced on March 22 that a commercial flock of 570,000 broiler chickens in Butler County were set to be euthanized after bird flu was detected in the flock.

NDA said the birds would “be humanely depopulated and disposed of in an approved manner,” and that the farm had also been quarantined immediately.

The virus was initially discovered in Nebraska on March 7 in a wild goose in Lincoln, Lancaster County, before additional cases were confirmed in Merrick, Cedar, and Douglas counties, according to an earlier NDA news release.

Federal and state officials are surveilling and conducting testing in the areas surrounding the outbreak locations.

Several outbreaks have also occurred among commercial flocks of chickens and turkeys in Iowa, two of which were announced March 29 by state agriculture officials.

In total, the outbreaks have been reported across 17 states and resulted in the U.S. poultry industry having to kill more than 15.6 million chickens and 1.3 million turkeys since Jan. 1, 2022.

“The United States has the strongest AI surveillance program in the world, and USDA is working with its partners to actively look for the disease in commercial poultry operations, live bird markets and in migratory wild bird populations,” the USDA said.

The USDA has said it expects food prices—including chicken and eggs—to surge 5 percent on average in 2022, in part due to the avian influenza outbreak and historically low levels of frozen chicken stocks in recent months.

The bird flu outbreaks could “contribute to poultry and egg price increases through reduced supply or decrease prices through lowered international demand for U.S. poultry products or eggs,” the USDA said.

While an Asian HPAI virus has resulted in high deaths in poultry and wild birds throughout Asia, the Middle East, Europe, and Africa since 2003, the risk of humans contracting the virus still remains low and no cases of avian influenza infection have been detected among humans in the United States.