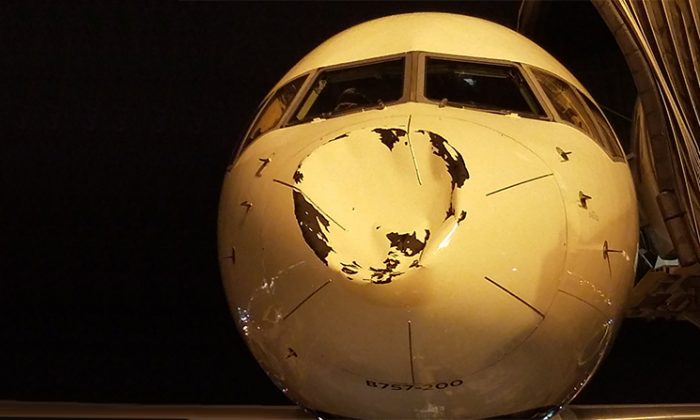 "What could we have possibly hit in the SKY at this time of night?” Carmello Anthony tweeted. (Carmello Anrhony/ RealStevenAdams)
NBA

The NBA’s Oklahoma Thunder took a lot of shots in their game against the Minnesota Timberwolves on the night of Friday, Oct. 27.

None of those were anything compared to the shot their plane took while flying home early Saturday morning.

When the team disembarked their Delta Airlines Boeing 757 shortly at Chicago’s Midway Airport after 1:00 a.m. Central Time, they found the nose cone of the plane they were riding was completely caved in.

Several players posted pictures of the damaged plane on Twitter.

I guess we hit something? 30,000 feet up… pic.twitter.com/Rem9GmwRKq

Okalahoma’s star small forward Carmelo Anthony captioned his picture of the dented plane, “What could we have possibly hit in the SKY at this time of night? Everyone is safe, though.”

“Delta flight 8935, operating from Minneapolis to Chicago-Midway as a charter flight for the Oklahoma City Thunder, likely encountered a bird while on descent into Chicago.

“The aircraft, a Boeing 757-200, landed safely without incident; customers have since deplaned and maintenance is evaluating. Safety is Delta’s top priority.”

Hey @NASA @neiltyson @BillNye
We had a rough flight to say the least.

No one on the plane was injured. In fact, one team official told a reporter that the flight was “a little rough, but nothing extreme or out of the ordinary.”

It is unlikely the bird fared well.

As it turns out, collisions with birds are not extraordinary. In fact, they happen often enough that airplane designers make the nosecones of their jets out of a malleable composite to help absorb the shocks of avian impact.

This bit of information was divulged in May of 2015 after a similar bird impact happened to Turkish Airlines flight TK2004 from Istanbul to Nevsehir. That plane, a Boeing 737-800, sustained an even scarier amount of damage.

In response, Dr. Ali Genc, Turkish Airlines senior vice president of media relations, explained that the nose cone “of a plane is being constructed by soft materials (composite) to minimalize the impact of such hits. Therefore, such standard/normal deformation occurs as a natural result of such incidents.”

Basically, Boeing knows its planes are going to bash into birds, so the planes have bird-bumpers.

Of course, bird/jet encounters don’t always work out well for the plane.

That collision sucked enough geese into the engines to force the plane to crash land in the Hudson River—which resulted in a dramatic rescue and stardom for the pilot, Chesley Sullenberger.

The incident was immortalized in the Hollywood movie “Sully: Miracle on the Hudson,” directed by Clint Eastwood and starring Tom Hanks as Sullenberger.

So, all in all, that avian aviation disaster worked out well, too.