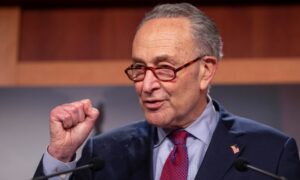 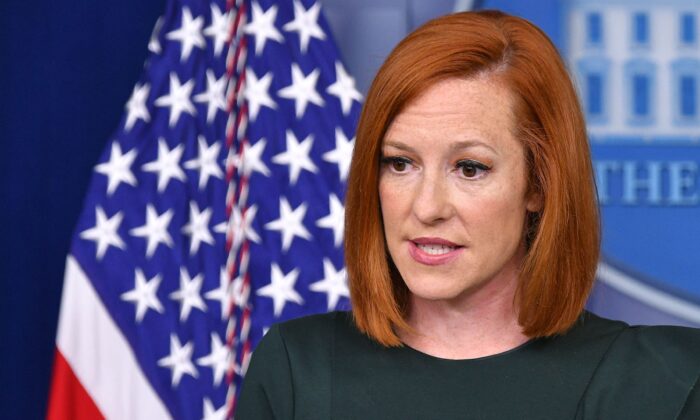 White House Press Secretary Jen Psaki speaks during the daily briefing in the Brady Briefing Room of the White House in Washington on June 23, 2021. (MANDEL NGAN/AFP via Getty Images)
Congress

A bipartisan senators’ group working on a major infrastructure package said Wednesday it had crafted a “framework” for a deal, and that members plan to meet President Joe Biden on Thursday for further discussion.

Emerging from a meeting with top White House officials, lawmakers said talks had been productive but cautioned that unresolved issues remained.

“We came to an agreement on a plan that we have and we’re just going to try to wrap it up tomorrow,” Sen. Joe Manchin (D-W.Va.) said after the meeting.

White House Press Secretary Jen Psaki said that the group “made progress towards an outline of a potential agreement.”

“The president has invited the group to come to the White House tomorrow to discuss this in person,” Psaki added.

The president, seeking to fuel economic growth and address income inequality after the CCP (Chinese Communist Party) virus pandemic, initially proposed that about $2.3 trillion be spent on a broad definition of infrastructure projects, including measures to cut carbon emissions as a way to address climate change and providing care for children and the elderly.

The White House trimmed the offer to about $1.7 trillion in an unsuccessful bid to win the Republican support needed for any plan to get the 60 votes required to advance most legislation in the evenly split 100-seat Senate.

A group of 21 Republican and Democrat senators last week reached an agreement on key points for an infrastructure bill, although it is unclear if the agreement will win wider support in Congress. Senate Majority Leader Chuck Schumer (D-N.Y.) is still working on a separate bill that would use budget reconciliation to break the Senate cloture rule, which would lower the voting bar from 60 to 50 votes. Democrats used the tool to push through the latest COVID-19 relief package. That legislation received zero Republican votes.

Republicans and Democrats each have 50 votes in the Senate. But Democrats hold the majority because Vice President Kamala Harris can cast tiebreaking votes in her role as president of the body.

The bipartisan group last week sought support for its emerging bipartisan proposal in a statement, saying that the plan would not hike taxes on wealthy individuals or corporations.

A major sticking point in the negotiations had been how to pay for the investments. Manchin said the framework encompassed a “long list” of so-called pay-fors and that all new spending would be offset with provisions to cover it.

“For the most part, we have a framework but there are components within that framework that need to be worked out,” Democratic Sen. Jon Tester of Montana, one of the lawmakers negotiating the package, said on Wednesday night.

“I would say that we’re very, very close, and we’re now going to do the outreach that is important to grow the vote from the middle out,” said Republican Sen. Rob Portman of Ohio.

Schumer, meanwhile, signaled Wednesday night that he and House Speaker Nancy Pelosi (D-Calif.) would back the framework.

“We’ll let them announce it first, let’s see it,” Schumer told reporters. “But we support the concepts we have heard about.”