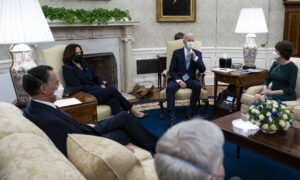 President Donald Trump's name is seen on a stimulus check issued by the IRS to help combat the adverse economic effects of the COVID-19 outbreak, in San Antonio, Texas, on April 23, 2020. (Eric Gay/AP Photo)
Congress

An amendment to the budget, sponsored by a bipartisan group of 16 senators led by Sens. Joe Manchin (D-W.Va.) and Susan Collins (R-Mass.), to focus stimulus checks on lower-income families was passed in the Senate on Thursday.

The amendment did not detail the threshold for the stimulus checks but said it would “establish a deficit-neutral reserve fund relating to targeting economic impact payments to Americans who are suffering from the effects of COVID–19,” and “ensure upper-income taxpayers are not eligible.”

The amendment was passed with a vote of 58-42. Sen. Bernie Sanders (I-Vt.), the chairman of the Senate Budget Committee voted in favor.

The measure was proposed and passed in a procedure Thursday afternoon that was set up for proposals of any amendments to the budget bill that is still under debate.

White House officials have said they are willing to compromise on the threshold of the income but not the amount on the check.

Ten Senate Republicans released a $618 billion proposal hours before they met President Biden on Monday evening. Many of those senators are also among the bipartisan group that sponsored the amendment.

One of the most striking differences between Republicans’ plan and Biden’s plan is the size of the stimulus check and the threshold for receiving them.

Some Democrats are looking forward to a new budget plan with stimulus checks of $1,400 directed to people with an income of $50,000 and less and couples with income of 100,000 and less.