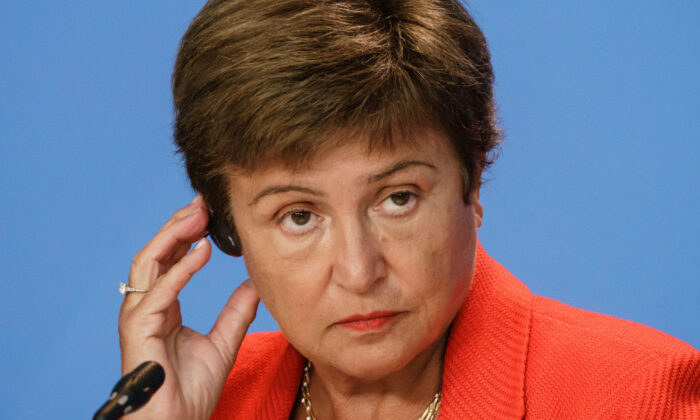 A bipartisan pair of top senators on Monday called on President Joe Biden to “ensure full accountability” after an investigation found that World Bank officials, including then-Chief Executive Kristalina Georgieva who is now the managing director of the International Monetary Fund (IMF), applied “undue pressure” on staff to boost China’s standing in a report.

The report (pdf) by law firm WilmerHale found that Georgieva, in her former job at the World Bank, pushed to boost China’s ranking in the bank’s “Doing Business 2018” report on country investment climates, which was released in October 2017.

China’s ranking in the report should have been seven places lower, at 85th rather than remaining at 78th, the World Bank said in a review released in December 2020.

The law firm’s report found China’s boosting appeared to be “the product of two distinct types of pressure applied by bank leadership on the Doing Business team.”

It said Georgieva and a key adviser had pressured staff to “make specific changes to China’s data points” and boost its ranking at a time when the bank was seeking China’s support for a big capital increase.

Georgieva has said she “fundamentally” disagrees with the findings.

“Given how critical it is that this data be and be seen as unimpeachable, these allegations are deeply disturbing,” Senate Foreign Relations Committee Chairman Bob Menendez, a New Jersey Democrat, and ranking member Republican Jim Risch of Idaho said in a letter addressed to Biden.

“The impact these allegations could have on the strength and reputation of our international financial institutions and the Bretton Woods system are still unknown—but surely they will not be good.”

Menendez and Risch in their letter urged the president to direct the Treasury Department to “do their due diligence with all due haste and, as necessary, ensure full accountability.”

Georgieva, who has been the IMF’s managing director since April 2019, on Friday pushed back against the allegations, calling them “false and spurious.” She accused the office of the World Bank’s former president, Jim Yong Kim, of manipulating the data.

The Epoch Times has contacted the Treasury Department for comment.

“As we have made clear, Treasury believes the report’s findings are serious and have warranted a full review by the IMF of the managing director’s role in the Doing Business Report,” Treasury spokeswoman Alexandra LaManna told Bloomberg in a statement. “Our primary responsibility is to uphold the integrity of the international financial institutions.”

The allegations are “deeply disturbing,” the senators wrote.

“At face value, the seriousness of the allegations that Ms. Georgieva would risk the integrity of both the data and the Bank to cater to the Chinese Government is hard to overstate,” Menendez and Risch added.