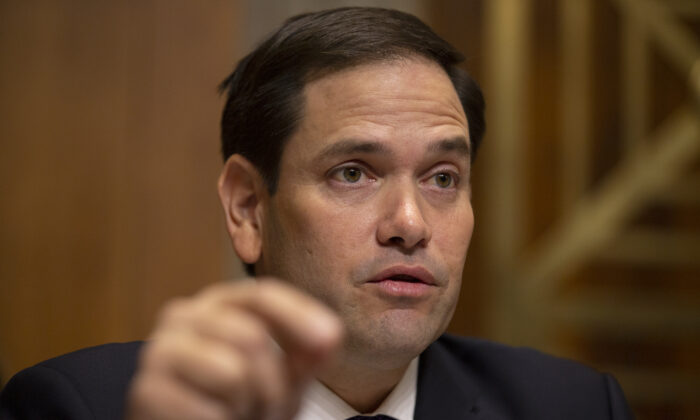 WASHINGTON—Nine senators, including seven Republicans, one Democrat, and Maine independent Sen. Angus King, aren’t satisfied that the Federal Energy Regulatory Commission (FERC) understands and is adequately prepared to respond aggressively to the threat represented by Huawei to U.S. energy infrastructure.

“We write today to get assurances from you that [FERC] fully appreciates the threat posed to the nation’s energy infrastructure by the use of equipment manufactured by Huawei Technologies Co., Ltd. (Huawei),” the senators told commission Chairman Neil Chatterjee in a Dec. 4 letter mailed on Dec. 6.

“Creating a new cybersecurity division within your agency is a good start. We are hopeful that one of the new division’s first objectives will be to defend this infrastructure against the threats posed by the use of equipment manufactured by Huawei.”

In addition to King, the signers include Republican Sens. Richard Burr of North Carolina, Ben Sasse of Nebraska, John Cornyn of Texas, Susan Collins of Maine, Marco Rubio of Florida, James Risch of Idaho, and Tom Cotton of Arkansas, plus Democrat Joe Manchin of West Virginia.

Rubio and Cotton, in particular, have been forceful advocates in the Senate for active measures by the federal government against Huawei, the digital telecommunications giant that is effectively controlled by the Chinese regime.

Huawei and its many subsidiaries in multiple countries around the world have sold billions of dollars of digital equipment to governments and corporations. National security experts contend that gives China surveillance and access capabilities to aid the theft of highly sensitive U.S. technology, military strategies and planning, and national systems such as energy infrastructure.

Huawei components also are used by numerous manufacturers of digital equipment that is bought in the United States, adding to experts’ concerns that current counter-measures may not be sufficient.

Earlier this year, the Department of Commerce put Huawei on a blacklist that requires suppliers here linked to the Chinese firm to apply for special licenses.

But on Dec. 4, Commerce Secretary Wilbur Ross said Huawei is encouraging such companies doing business with it to move operations off-shore to evade the blacklist.

Huawei has “been openly advocating companies to move their production offshore to get around the fact that we put Huawei on the list,” Ross said. “Anybody who does move the product out specifically to avoid the sanction … that’s a violation of U.S. law. So here, you have Huawei encouraging American suppliers to violate the law.”

The senators told Chatterjee, “As you know, the intelligence community has issued repeated warnings to regulators and political leaders about the dangers associated with using Huawei equipment on the nation’s telecommunications network.”

Federal officials are moving against Huawei because of “concerns with the company’s links to the Chinese Communist Party, including its intelligence services,” the senators wrote.

“Given FERC’s responsibility for overseeing the reliability of the electric grid, it is critical that your agency take steps to ensure that United States critical infrastructure and the electric grid remain protected from foreign intrusion.”

The senators said they are especially worried about the presence of Huawei components in solar energy equipment used in the United States.

The senators said, “Huawei’s line of solar products relies on inverters—devices that manage and convert energy produced by solar panels—for use in homes and businesses.”

If such inverters are “connected to the U.S. energy grid, it could leave it vulnerable to foreign surveillance and interference, and could potentially give Beijing access to meddle with portions of America’s electricity supply,” they said.

On Dec. 2, Sen. David Perdue (R-Ga.) told the Senate about his recent trip to China.

“Confucius has one saying that I think is very telling about China’s transition right now: ‘Just as there can’t be two suns in the sky, there can’t be two emperors on the earth.’ The word they use for emperor most of the time is ‘Ba,’ and the tone they use means ‘hegemon.’”