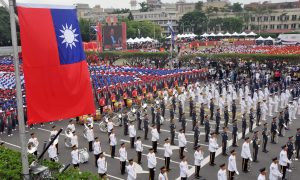 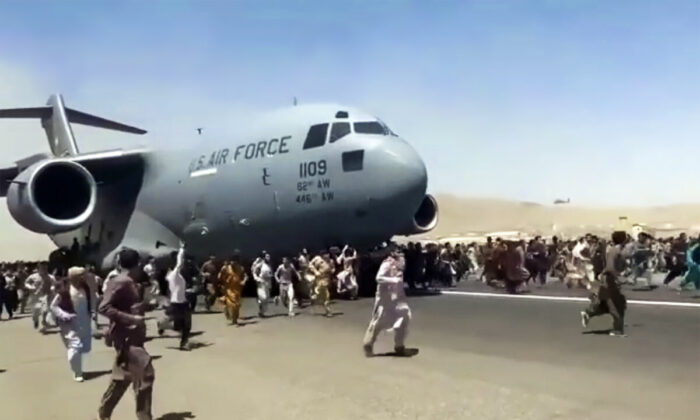 Hundreds of people run alongside a U.S. Air Force C-17 transport plane as it moves down a runway of the international airport, in Kabul, Afghanistan, on Aug. 16. 2021. (Verified UGC via AP)
Afghanistan

A bipartisan group of U.S. lawmakers who have military backgrounds took part in a roundtable on Aug. 20 to discuss the situation in Afghanistan, urging the White House to extend its evacuation efforts beyond the Kabul airport, while arguing that the Aug. 31 deadline is helping to fuel the chaos on the ground.

Four members of Congress who served in the military—Reps. Don Bacon (R-Neb.), Jason Crow (D-Colo.), Kaialiʻi Kahele (D-Hawaii), and Peter Meijer (R-Mich.) offered their takes on the situation in the country and current evacuation efforts during the virtual event hosted by the Bipartisan Policy Center.

“The Aug. 31 deadline is contributing to the chaos and the panic at the airport because you have Afghans who think that they have 10 days to get out of this country or that door is closing forever,” said Meijer, an Army veteran who deployed to Iraq in 2010.

With time running out ahead of President Joe Biden’s deadline to withdraw most remaining U.S. troops from Afghanistan, the president faces growing criticism amid a flurry of reports and images of pandemonium and occasional violence outside Kabul airport, and as vulnerable Afghans, who fear a vengeful crackdown by the Taliban, send desperate pleas not to be left behind.

“There are hordes of crowds who think the clock is ticking, that their opportunity to save their own lives is ticking,” Meijer said. “That is hindering this operation, because of the lack of clarity on where we’re going.”

Biden addressed the situation in a press conference on Aug. 20, during which he reiterated his vow to evacuate all willing U.S. citizens, while extending that commitment to Afghans who assisted with the war effort. While he didn’t commit to extending the Aug. 31 deadline, he did leave the door open for such a move.

“I think we can get it done by then, but we’re going to make that judgment as we go,” Biden said, responding to a reporter asking whether he was willing to order U.S. troops to stay beyond Aug. 31 to assist with the evacuation and “bring all the Americans out, to bring those SIVs out,” referring to Afghans applying for refugee status under the Special Immigrant Visa program.

The Pentagon evacuated about 8,000 people from Kabul airport last week, although advocacy groups say thousands more are being turned away due to Taliban restrictions or problems with paperwork.

Crow, an Army veteran who served tours in Iraq and Afghanistan, said at the roundtable that evacuation efforts should have started earlier, while urging the Biden administration to extend its efforts beyond the confines of the airport in Kabul.

“We’re continuing to push and calling the administration for a commitment to stay as long as necessary to evacuate all American citizens, and asking our partners to hold the airport to extend that security beyond the perimeter of the airport so [evacuees] will actually make it to the airport,” Crow said.

Top Defense Department officials said earlier there was a lack of deployed manpower to extend the security past the airport, but the Pentagon has flown more troops into Kabul, and security at the airport is more stable, Department of Defense spokesman John Kirby told reporters on Aug. 20.

Kirby said that the capability to carry out sorties beyond the airport perimeter is there now, although each proposed mission would need to be analyzed for potential risks and benefits.

He said that U.S. troops left the airport in Kabul last week to rescue 169 Americans.

Pressed for more details, Kirby said he wasn’t aware of the tactical details, such as whether guns were drawn, or any similar operations.

The mission was significant because it’s the first time, according to U.S. officials, that American troops have left the U.S.-held airport to rescue Americans. Scattered reports assert that rescue missions have been carried out by U.S., British, and French special forces.

While it’s unclear how many U.S. citizens remain in Afghanistan, estimates have put the figure at up to 15,000.

Tens of thousands of Afghan translators and others, along with their close family members, also are seeking evacuation after the Taliban’s swift takeover of Afghanistan, with the fall of Kabul marking what appears to be the final chapter of America’s longest war.