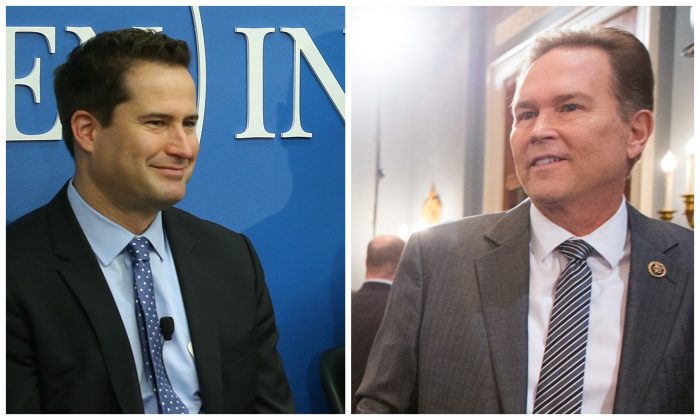 WASHINGTON—Reps. Vern Buchanan (R-Fla.) and Seth Moulton (D-Mass.) introduced the Fentanyl Sanctions Act on April 10, a bipartisan measure intended “to force China to stem the flow of deadly, synthetic opioids being trafficked into the United States.”

Fentanyl, which is chemically similar to heroin but 50 times more powerful, is the main substance the measure targets because it was associated with more than 28,000 opioid overdose deaths in 2017, 40 percent of the 70,000-plus overdose deaths recorded that year.

An estimated 80 percent of the drug that comes into the United States originates from China, according to a joint statement issued by Buchanan and Moulton. Chinese officials agreed on April 1 to clamp down on fentanyl trafficking.

While China is the major source of fentanyl trafficking into the United States, significant amounts also come from Mexico and other countries.

“Fentanyl and other opioids have ravaged Florida communities and torn apart many families and lives,” Buchanan said. “While I welcome China’s announcement that it will ban all forms of fentanyl, we must ensure that their words are followed through with meaningful action.

“I urge my colleagues to immediately approve this bipartisan bill to deliver another resource that could help combat the flow of opioids across our borders.”

Moulton added that “[fentanyl] has become the leading illegal drug in the opioid crisis in our country, and it’s time we attack the source.

“While China’s ban on producing fentanyl is a promising start, Congress should hold China to its word. This bill will target the fentanyl producers worldwide who profit from the overdose deaths happening in communities across our country, including Massachusetts, where fentanyl is the leading cause of opioid-overdose deaths. Congress must act quickly.”

Provisions of the measure include:

Buchanan and Moulton are acutely aware of the seriousness of the fentanyl problem in their respective states, according to the joint statement.

“Synthetic opioids, like fentanyl, were responsible for the greatest increase in opioid deaths in Florida between 2012 and 2017. Its many spinoffs can be even more powerful, especially the elephant tranquilizer carfentanil, and they led to more deaths in Manatee County than any other county in Florida in 2016.

“Meanwhile, in Massachusetts, the opioid-overdose related death rate has tripled in four years from 691 to 1,990, and Fentanyl has overtaken prescription drugs and heroin as the leading cause of opioid-overdose deaths.”

“The flow of illicit fentanyl largely from China into the U.S. poses serious threats to our families, public health, economic vitality, and national security,” Rubio said. “With Florida suffering thousands of opioid-related deaths per year, we must do all we can to stop the opioid crisis sweeping across America and devastating our communities.

“This bipartisan effort to impose targeted sanctions on foreign illicit fentanyl manufacturers and traffickers makes clear that the U.S. will hold the Communist Chinese Government and other nations fully accountable when they turn a blind eye to international fentanyl trafficking.”