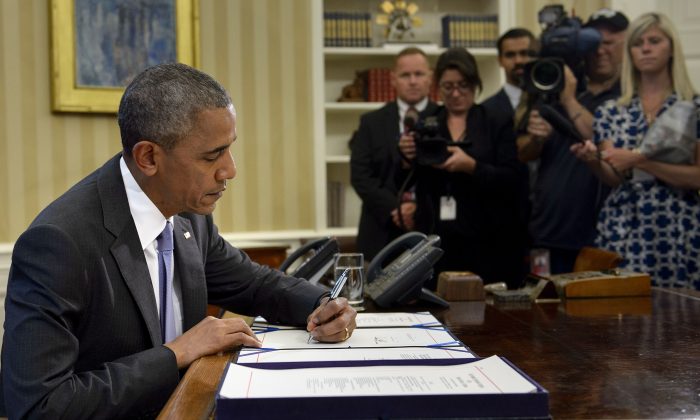 U.S. President Barack Obama signs the Freedom of Information (FOIA) Improvement Act into law in the Oval Office of the White House on June 30, 2016. (Brendan Smialowski/AFP/Getty Images)
US

A bipartisan group of U.S. Senate and House leaders wants Attorney General Merrick Garland to remind federal agency heads that they’re required by law to make public any documents sought under the Freedom of Information Act (FOIA), unless they have a solid legal reason to do otherwise.

Their Feb. 23 letter was prompted by Garland’s failure in the first year of President Joe Biden’s administration to do what other recent attorneys general have routinely done, which is to circulate such a reminder prior to the end of that first year.

“The Department of Justice (DOJ) is responsible for encouraging agency compliance with the FOIA. The Attorney General has historically issued FOIA standards before the end of October during the first year of a new administration,” the six signers of the letter wrote.

“As the Biden administration begins its second year, the need for guidance becomes increasingly urgent. We therefore urge [Garland] to issue FOIA guidance that emphasizes a presumption of openness and transparency” in the federal government, the signers wrote.

“Additionally, the guidance should reiterate and underscore that FOIA is not authority to withhold information from Congress.”

The writers told Garland that “a clear message from you that transparency is a priority would encourage agencies to improve FOIA implementation”; they asked the attorney general to tell them when he plans to issue the guidance.

The FOIA law, which was approved by Congress in 1966 and signed by then-President Lyndon Johnson, has been updated multiple times in the decades since; it’s among the most important legal tools that nonprofit groups and individual activists have to hold government accountable.

Nearly 800,000 FOIA requests were submitted to federal agencies in 2020, the most recent year for which complete data is available, with private businesses and law firms doing so most frequently, followed by nonprofit organizations such as Judicial Watch, Open The Books, and Project on Government Oversight. Journalists typically file less than 10 percent of all FOIA requests.

The Feb. 23 letter follows a similar one sent to Garland on Jan. 31 that was signed by a coalition of 23 nonprofit activist groups that advocate for increased government transparency and that collectively file thousands of FOIA requests to federal agencies every year. The documents such groups receive via FOIA requests regularly result in significant national news stories.

“Last year, many of our organizations wrote to your office to offer recommendations for how [DOJ] could implement a ‘generous’ reading of FOIA, as you testified it would during your confirmation hearing,” the coalition letter stated.

“However, in the nine months since then, your office has neither responded to the letter nor published any significant guidance for agency compliance with the FOIA. Our hope was that the DOJ would address the government’s troubling tendency toward less disclosure and the increasing challenges requesters are facing during the FOIA process.”

The letter appealed to Garland “to act on this critical matter” because noncompliance by federal agencies “is at a decade-long high even while requesters are waiting longer than ever to initiate litigation.” The needed guidance is “long overdue,” the coalition stated.

Both letters follow a January 2022 report by the Government Accounting Office that said federal agencies processed 12 percent fewer FOIA requests in 2021 than in the prior year.

The congressional investigative agency had found in a January 2021 analysis of executive branch compliance with the FOIA that the number of backlogged requests jumped 97 percent from 2012 to 2020 and then another 18 percent from 2020 to 2021.