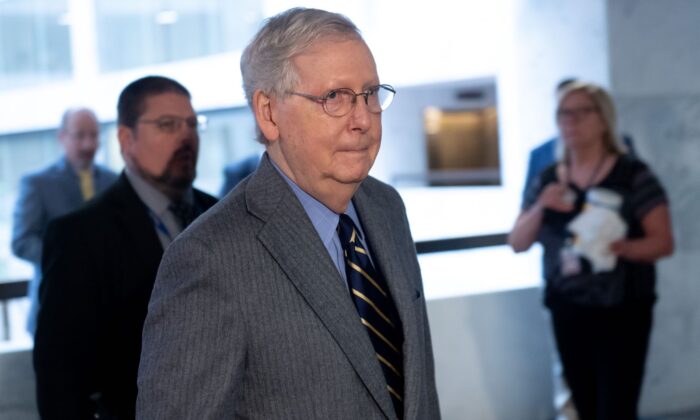 US Senate Majority Leader Mitch McConnell arrives to attend a meeting to discuss a potential economic bill in response to COVID-19, in Washington on March 20, 2019. (Saul Loeb/AFP via Getty Images)
AMERICA

The U.S. Senate passed a bill on April 21 for a new round of CCP virus aid, sending it to the House for a vote this week.

“The Senate is continuing to stand by the American people,” said Senate Majority Leader Mitch McConnell (R-Ky.) on the floor of the upper congressional chamber.

Treasury Secretary Steven Mnuchin said he expected the House to vote on the bill on April 22.

The legislation in this round of stimulus funding approves $482 billion in aid, including for small businesses, hospitals, and to increase CCP virus testing.

It comes days after the Small Business Administration’s Paycheck Protection Program (PPP)—which was passed last month as part of the third stimulus package—ran out of money, meaning no new loans could be issued until it was replenished. The new bill provides an additional $310 billion for the program.

“We look forward to the House passing this tomorrow and being up and running quickly after that,” Mnuchin said at the White House press briefing on April 21.

President Donald Trump said the White House has “tremendous support” for the bill.

“My administration has worked aggressively with Congress to negotiate this critical $482 billion funding package,” Trump said at the White House on April 21. “I urge the House to pass the bill, and they’re going to be voting on it, I imagine, very soon.”

Mnuchin said that more than a million small businesses with less than 10 employees each received loans through PPP. Responding to news that some larger companies with access to capital obtained the loans, Mnuchin said the Treasury will issue a notice clarifying that the loans are for struggling companies.

“They shouldn’t be taking them,” Trump said, adding that he will personally ask some large companies to return the money.

“When I saw Harvard—they have one of the largest endowments in the country, maybe in the world—they’re going to pay back that money.”

Shake Shack had earlier announced that it would return its loan.

After the PPP exhausted its funds, growing pressure mounted on Congress and the federal government to come to an agreement on a new round of funding.

McConnell and Senate Democrats initially tried to pass their own separate proposals earlier this month, but both were blocked.

Democrats wanted to add billions more for hospitals as well as state and local governments. McConnell on April 21 declared victory, saying Democrats had dropped “a number of their unrelated demands” during negotiations, according to a statement from his office.

“Democratic leaders blocked the money and spent days trying to negotiate extraneous issues that were never on the table. I am grateful our colleagues have walked away from those demands and will finally let Congress act,” he said.

House Speaker Nancy Pelosi (D-Calif.) and her leadership team have sent members of Congress notices about an 11 a.m. caucus call over the measure, Bloomberg News reported.

The House most likely will not be able to pass the legislation unanimously, and Representatives were asked to come back to the Capitol in Washington this week, according to Rep. Steny Hoyer (D-Md.), the House majority leader.

“We are asking every member to return who can return,” Hoyer told reporters on April 21. “There are some members who are particularly vulnerable to either themselves because of some preexisting condition, or they are caring for relatives … so we’re not ordering members to come back.”

Pelosi told CNN on April 20 that the GOP and Democrats have an agreement, while negotiations were “down to the fine print” of the bill.

Companies and nonprofits that have fewer than 500 workers can apply for PPP loans up to $10 million to cover two months of payroll along with other expenses. Under the deal, borrowers that retain workers and don’t cut wages will have most or all of their loans forgiven by the government.

The Treasury Department said last week that 1.6 million PPP loans had been approved.

Trump noted that Mnuchin will immediately begin working on the next phase of the stimulus package. The government’s response to the economic toll of the shutdowns triggered by the CCP virus already amount to the largest stimulus action in U.S. history.