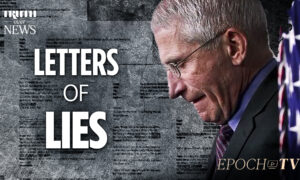 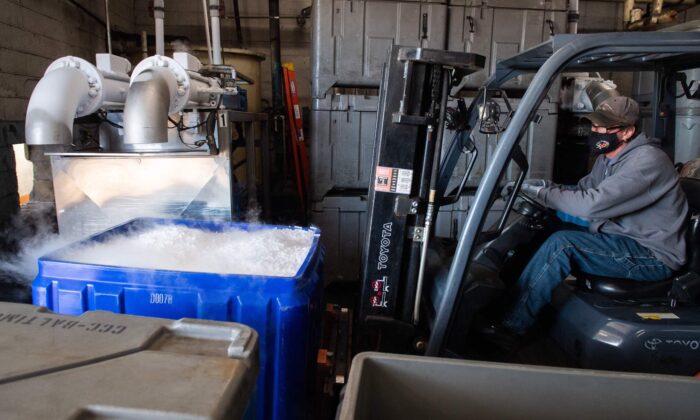 An employee at Capitol Carbonic, which makes dry ice used by the pharmaceutical industry, uses a forklift to move a cooler of dry ice pellets in a warehouse in Baltimore, Maryland, on Nov. 20, 2020. (Saul Loeb/AFP/Getty Images)
Vaccines & Safety

A bipartisan group of lawmakers on June 16 reintroduced legislation that would make the U.S. pharmaceutical supply chain less dependent on foreign countries such as China.

The measure seeks to help mitigate shortages while incentivizing the domestic production of drugs, active pharmaceutical ingredients, personal protective equipment (PPE), and diagnostics, according to Rep. Earl L. “Buddy” Carter (R-Ga.), one of the bill’s co-sponsors.

“The COVID-19 pandemic made it very clear that America cannot continue to rely on foreign entities like China for lifesaving medications,” Carter said in a statement.

The bill envisions a new tax credit that would apply only to manufacturers operating in designated American Opportunity Zones, encouraging companies to maintain, expand, or relocate their production activities back to the United States.

“This legislation illustrates the transformative power of Opportunity Zones, which have not only spurred billions of dollars of investment into our nation’s poorest communities but will also be a catalyst for the resurgence of American manufacturing,” said Sen. Tim Scott (R-S.C.), a co-sponsor of the measure.

Currently, nearly three-quarters of active pharmaceutical ingredients used in the U.S. drug supply are manufactured in more than 150 other countries, according to the Food and Drug Administration (FDA).

“I want America to be competitive on the world stage in as many ways as possible. The U.S. currently obtains 72 percent of Active Pharmaceutical Ingredients (API) from other countries, including 13 percent from China,” said Rep. Tom Rice (R-S.C.), also a co-sponsor of the bill.

The measure also includes provisions meant to mitigate drug shortages, such as streamlining FDA standardization processes for overseeing pharmaceutical manufacturing and other components of the supply chain. It also seeks to improve FDA reporting of facility inspections and working more closely with overseas regulators.

“The pandemic revealed a concerning reliance on other nations, especially China, for critical components of medications that Americans rely on every day,” said Rep. Matt Cartwright (D-Pa.), another co-sponsor. “As we work to revitalize our nation’s manufacturing base, this legislation will bring medicine production back to our shores.”

The MADE in America Act comes on the heels of a 100-day supply chain review (pdf) directed under President Joe Biden’s Executive Order 14017, “America’s Supply Chains.”

The report calls for greater investment in the development of new pharmaceutical manufacturing processes, including using both traditional manufacturing techniques and on-demand manufacturing capabilities for supportive care fluids, APIs, and finished dosage form drugs, according to the White House.

“China and India are estimated to control substantial parts of the supply chain where there have been issues with shortages due to a range of disruptions that have impacted supply as well as quality and safety,” the White House said in a statement.

“The drive toward lower costs as well as unfair trade practices have led to a hollowing out of domestic production. A new approach is needed to ensure more resilient supply chains that includes improving transparency, building emergency capacity, and investing in domestic production.”

The Biden administration’s supply chain task force also recommended that Congress grant the Department of Health and Human Services new powers that allow the agency to monitor production by facility, track API sourcing, and require identification of the source of API on labels of all pharmaceuticals sold in the United States.