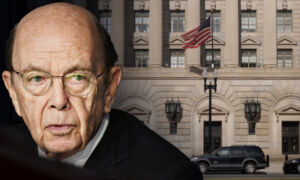 A silicon wafer is displayed during a technology event in San Jose, Calif, on March 23, 2011. (Justin Sullivan/Getty Images)
National Security

A bipartisan group of senators has introduced a bill that would strengthen U.S. semiconductor supply chains by incentivizing domestic manufacturing of this key technology and “stop China from winning the race to produce these chips.”

The bill, called the Facilitating American-Built Semiconductors (FABS) Act (pdf), seeks to push back against the trend that has seen the United States’s share of global semiconductor production fall from 37 percent in 1990 to just 12 percent today.

“As much as 70 percent of the cost difference for producing semiconductors overseas is driven by foreign subsidies, rather than comparative advantages,” the senators wrote in a June 17 release. “The senators’ bill would close that gap by incentivizing production of semiconductors in the United States.”

The legislation aims to amend the Internal Revenue Code of 1986 to establish a semiconductor manufacturing investment credit.

“Our bill would provide a significant investment tax credit to companies that build chips here at home, rather than overseas,” said bill co-sponsor and Senate Finance Committee Chair Ron Wyden (D-Ore.), in a statement.

“As we’ve seen amidst the global semiconductor shortage, this supply chain is both absolutely essential and increasingly vulnerable,” Sen. John Cornyn (R-Texas), who co-sponsored the bill, said in a statement. “This legislation would help us bring semiconductor manufacturing back to U.S. soil, secure future leadership in semiconductors, and stop China from winning the race to produce these chips.”

The report calls for a number of measures to address the current semiconductor shortage, including incentivizing American chip manufacturing via federal financial assistance, providing R&D resources to help bring emerging technologies from lab to market, boosting the talent pool of potential employees in the semiconductor industry, and protecting the U.S. technological advantage in chipmaking by enhancing export controls over key technologies.