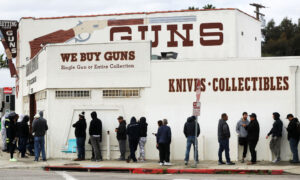 A gun in a file photo. (Scott Olson/Getty Images)
Congress

“It’s simple: background checks keep guns out of dangerous hands,” Nadler wrote. “More than 90% of Americans want this bill signed into law. Let’s get it passed and save lives.”

Today, alongside @RepThompson, I reintroduced the Bipartisan Background Checks Act of 2021.

It’s simple: background checks keep guns out of dangerous hands. More than 90% of Americans want this bill signed into law. Let’s get it passed and save lives.https://t.co/NLRqdTBYfk

“I am proud to support the Bipartisan Background Checks Act to extend the firearms background check requirement so that we can help keep guns out of the hands of felons and others who are legally prohibited from possessing them. No longer should those who are prohibited from owning a gun use gaps in the law like the online sale loophole and the gun show loophole to obtain these weapons,” Nadler wrote on his official website, asserting that the legislation has the “overwhelming support of the American people.”

Additionally, legislation that would grant extra time to federal officials to do background checks was reintroduced by House Majority Whip James Clyburn (D-S.C.). It aims to end the “Charleston loophole,” which permits gun sales to go ahead even if a background check hasn’t been finalized in three days.

“A large majority of Americans, including gun owners, support universal background checks. This legislation is needed to keep weapons out of the hands of those who should not have them and save lives,” Clyburn said according to The Hill.