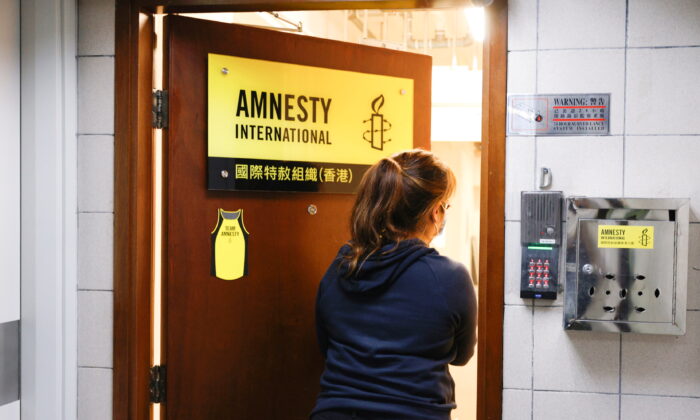 In an unusual show of unity, Democrats and Republicans in Congress are expressing anger and dismay in response to a report from Amnesty International (AI) that accuses Israel of imposing apartheid on Palestinians.

“Amnesty International’s new investigation shows that Israel imposes a system of oppression and domination against Palestinians across all areas under its control: in Israel, and the OPT [Occupied Palestinian Territories], and against Palestinian refugees, in order to benefit Jewish Israelis. This amounts to apartheid as prohibited in international law,” AI stated in a report that was announced during a news conference in Jerusalem on Feb. 1.

“Laws, policies and practices, which are intended to maintain a cruel system of control over Palestinians, have left them fragmented geographically and politically, frequently impoverished, and in a constant state of fear and insecurity,” the AI report stated.

Apartheid is a system of institutionalized racial segregation and discrimination. It’s most often associated with South Africa, where it lasted for 46 years, ending in 1994, with F.W. de Klerk serving as the last apartheid leader and as a high official in the post-apartheid government headed by Nelson Mandela.

The AI declaration quickly drew condemnation from U.S. senators and representatives from both sides of the aisle.

“I am deeply disturbed by Amnesty International’s report calling Israel an ‘apartheid state.’ This outrageous accusation belies history, facts, and common sense. Israel remains the only democracy in a region of autocrats and human rights abusers; one that values human rights, individual liberty and where protest, dissent, and civil society are vibrant,” Senate Foreign Relations Committee Chairman Bob Menendez (D-N.J.) said in a statement.

“By identifying Israel’s very establishment as the foundation for this accusation, Amnesty International has joined a growing chorus of vicious voices intent on denying Israel’s right to exist through slander, misinformation, and ignoring that both Israelis and Palestinians are responsible for their own fates.”

Senate Republicans were equally outraged, with Sen. John Boozman of Arkansas declaring that “Israel is a steadfast, strategically committed to the values of democracy and freedom. Unfortunately, it is still targeted with grossly biased and antisemitic attacks that threaten to expose it to further violence and hate.”

Boozman called the AI report “dangerous, ill-founded, and unfair, particularly given its failure to acknowledge the Jewish State’s security situation, which has required it to fend off terrorism and warfare from around the region and within its own borders throughout its existence.”

Sen. Steve Daines (R-Mont.) publicized his letter to AI Secretary General Agnès Callamard, writing: “Israel’s Arab citizens have full rights and the ability to participate within the democratic process and have their voices heard and represented within Israel’s government.”

Daines said the AI report “serves as a blatant example of double standards being applied to Israel in an effort to delegitimize the government … I stand with Israel and Jewish people around the world, and urge you to retract this report immediately.”

In the House, Rep. Lee Zeldin (R-N.Y.) described AI as “a so-called ‘human rights organization’ that routinely hurls false accusations of oppression against Israel, ignores violent attacks on Israel from its hostile neighbors, and fans the flames of antisemitism around the world.”

Zeldin, who is seeking the Republican nomination for New York’s November gubernatorial election, called on “all of the recipients of Amnesty’s campaign contributions, President [Joe] Biden, Vice President [Kamala] Harris, the Democratic National Committee, and all others, to immediately condemn this slander against our nation’s greatest ally, Israel, and return any and all contributions they have received from Amnesty International.”

Rep. Haley Stevens (D-Mich.) in a statement rejected what she described as “the persistent and growing effort to demonize Israel, the world’s only Jewish state and a close American ally, on the international stage.

“Whether through the chronic bias displayed by the United Nations Human Rights Council (UNHRC) or accusations put out by groups like Amnesty International, I stand opposed to efforts to unjustifiably brand Israel as an ‘apartheid state,’ and I will always work to mitigate the threat of delegitimization against our closest friends in the Middle East.”

In addition, Israel in the USA spokesman Elad Strohmeyer tweeted a link to a Wall Street Journal editorial that notes: “Israel is a democracy that accords more rights to Arabs and Palestinians than does any other state in the region.”

A spokesman in AI’s London office didn’t respond to The Epoch Times’ request for comment.