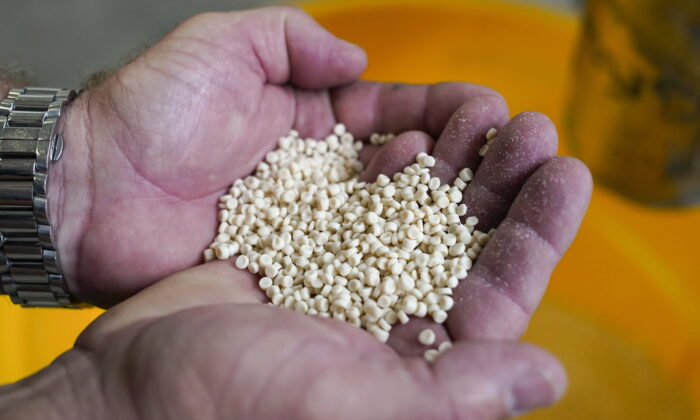 Kevin Welsh holds up PHA pellets at the Danimer Scientific plant, on Aug. 3, 2022, in Winchester, Ky. Companies are investing billions of dollars to ramp up production of plastics made from natural, renewable materials that can be safely composted or can biodegrade under the right conditions. Danimer Scientific is one of the companies making a big bet on bioplastic with its expansion of a plant. (AP Photo/Jeff Dean)
Companies

Investors are pouring billions into the bioplastics industry, foreseeing a massive business opportunity in a sector at a time when plastic pollution has become a major global concern.

Bioplastics are biodegradable plastics derived from sources such as sugars and starches, rather than petrochemicals. Investment in bioplastic manufacturing jumped to $500 million in the first quarter of 2022, from $350 million in the previous quarter, according to data from market intelligence provider i3 Connect.

Georgia-based Danimer Scientific is making a big bet, investing more than $700 million into expanding its manufacturing operations in that state. The company, which was founded in 2007, creates products used in industries such as food packaging, bottling, and more for brands such as Nestle, Pepsi, and Mars-Wrigley.

Danimer has broken ground for a new 2 million-square-foot facility that will manufacture a type of a biodegradable plastic called polyhydroxyalkanoate (PHA), which is created by using microorganisms that ferment with canola oil. The site is estimated to be completed by late summer of 2023.

Tests have shown that Danimer’s PHA can biodegrade within two years in soil and in six months in a marine environment, CEO Stephen Croskrey said in an interview with The Associated Press.

Meanwhile, plastics made from fossil fuels never fully disintegrate, instead just breaking down into smaller particles. Since 1950, about 9 billion tons of fossil fuel plastics have been manufactured, of which just 9 percent is estimated to have been recycled.

Another type of bioplastic is polylactic acid (PLA), which is made by fermenting sugar extracted from sugar cane and corn. NatureWorks, based in Minneapolis, is the world’s largest PLA company, and is investing $600 million at its plant in Thailand.

Unlike PHA, PLA takes longer to disintegrate. It needs to be mixed in with food waste to break down, something that will only occur over several decades.

The U.S. biodegradable market is estimated to be worth $1.94 billion in 2022, according to a June 10 statement by Research and Markets. The firm expects the market to grow at a compound annual rate of 20.1 percent, to $4.5 billion by 2027.

Concerns Regarding Land Use, Product Marketing

There are concerns about using agricultural land to manufacture bioplastics. Hasso von Pogrell, managing director of European Bioplastics, however, dismisses such worries.

“In relation to the available agricultural area, this share is still minimal. Thus, there is no competition between the renewable feedstock for food and feed and the production of bioplastics,” von Pogrell said, according to a December 2021 article published at the European Bioplastics website. “Over 90 percent of the global agricultural area is used for pasture, feed, and food.”

Companies are using claims of biodegradability as a tool to attract customers, Ramani Narayan, a professor of chemical engineering at Michigan State University, told AP. He thinks that the term has been “misused, abused, and overused.”