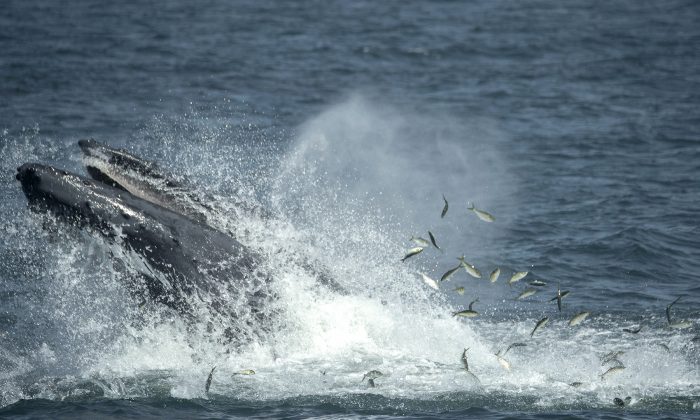 FILE - In this Aug. 28, 2014 file photo provided by the Wildlife Conservation Society, a humpback whale breaks the surface in the waters through a school of fish six miles off the coast of New York City. Naturalists aboard whale-watching boats have seen humpbacks in the Atlantic Ocean within a mile of the Rockaway peninsula, part of New York's borough of Queens. Humpback whales, the gigantic, endangered mammals known for their haunting underwater songs, were spotted 87 times from the boats in 2014. That's up from three sightings in 2011. (AP Photo/Wildlife Conservation Society, Julie Larsen Maher, File)
Environment

Biologist Reveals How Whales May ‘Sing’ for Their Supper

Humpback whales have a trick or two when it comes to finding a quick snack at the bottom of the ocean. But how they pinpoint that meal at night, with little or no available light, remains a mystery.

Susan Parks, assistant professor of biology in the College of Arts and Sciences, in collaboration with a consortium of other researchers, has been studying these unique feeding behaviors. Her research emphasizes the importance of specific auditory cues that these mammoth creatures emit as they search the deep ocean for their prey.

Her findings are the subject of an article in the December issue of Scientific Reports (“Evidence for acoustic communication among bottom foraging humpback whales,” 2014), co-authored by researchers at Moss Landing Marine Laboratories, Oregon State University, Gerry E. Studds Stellwagen Bank National Marine Sanctuary and the Whale Center of New England.

“Humpback whales are known to cooperate with others to corral prey near the surface,” says Parks, who studies marine science and acoustic communication. “Recent studies suggest they may cooperate [with each other], when feeding on bottom prey, as well.”

Parks was part of a collaborative multi-institutional consortium that has spent a decade monitoring humpback feeding behaviors in the Gerry E. Studds Stellwagen Bank National Marine Sanctuary, off the coast of Massachusetts. Whales were tagged with special underwater recording devices so Parks could determine how specific acoustic sounds correlated with successful seafloor feeding.

The investigation revealed that whales make “tick-tock” noises while hunting together at night in deep, pitch-black water, but are silent when hunting alone.

On the menu? Mostly sand lance—eel-like fish known to bury themselves in the sand of the ocean floor. Parks suggests that whales’ vocal sounds may help flush the sand lance out of hiding to where they’re scooped up and eaten.

The clock-like sounds created by whales may also serve as a dinner bell of sorts for other nearby whales during late-night feedings.

“Hints of behavior suggest that other whales who overhear the sounds are attracted to them and may eavesdrop on other whales hunting for food,” Parks adds.

Prior to joining Syracuse’s faculty in 2011, Parks held various appointments at Pennsylvania State University, Cornell University and the Woods Hole Oceanographic Institution. She is the recipient of numerous honors and awards, including the Presidential Early Career Award for Scientists and Engineers, the U.S. government’s highest honor for scientists and engineers.