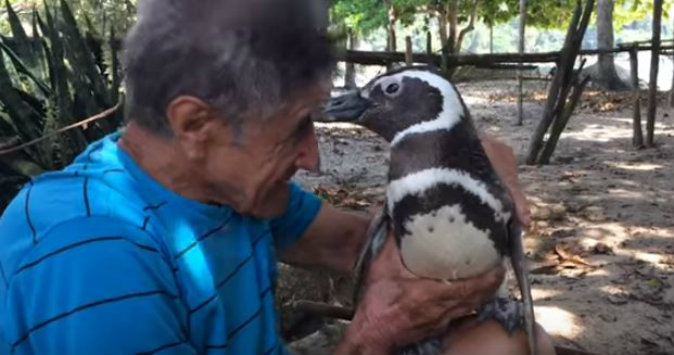 Retired 71-year-old bricklayer and part-time fisherman Joao Pereira de Souza, who once saved a penguin’s life during an oil spill in May 2011, has been getting yearly visits from the South American Magellanic penguin, which reportedly swam 5,000 miles to see him each year.

The story went viral and has been widely circulating the web. However, according to biologist, Joao Paulo Krajewski, there have been a lot of misconceptions about what really happened.

“Some articles published that “penguin travels 5 thousand miles every year to see his rescuer,” he said, “We don’t know where the penguin goes when it is out at the sea, but it is extremely unlikely that it travels to Patagonia.”

I am happy to see the story I presented spread all over the world, but I am also concerned by the amount of misconceptions.
— Joao Paulo Krajewski

Krajewski, who documented this story for Globo TV, a media network in Brazil, posted this message on his Facebook in February: “I am happy to see the story I presented spread all over the world, but I am also concerned by the amount of misconceptions spread and by some articles changing my statements.”

He claims to be “absolutely shocked” about “the amount of mistakes and wrong statements” that were introduced into many articles that he read, so he decided to clarify the story last week on March 9.

“The penguin was covered in oil and could barely move. Mr. Joao cleaned and fed the penguin for days until, according to Joao’s judgment, Dindim was strong enough to be released in the sea. Joao took the penguin in a boat, went to a nearby island and released the animal. The same day the penguin went straight back to Joao’s backyard at Provetá beach, stayed there until Feb next year and then went out to the sea. Next June Dindim returned to Mr. Joao’s house and made several vocal calls when he saw the man,” he wrote.

He then went on to list several “important and interesting facts” on his Facebook regarding the heartwarming story.

The true story of Dindim, the rescued penguin from Ilha Grande, Brazil, that returns every year to his rescuer. Since I…