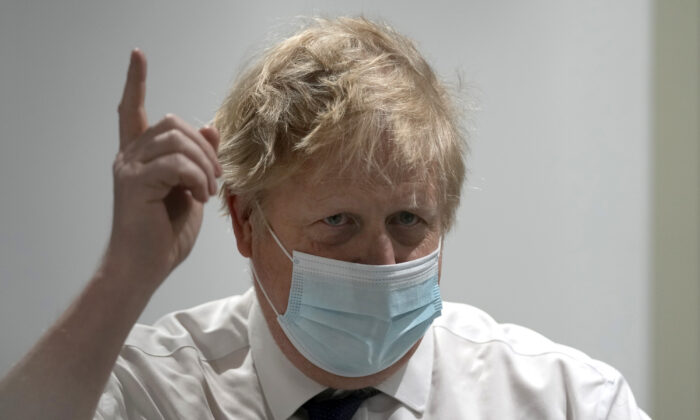 Biological Males Should Not Compete in Women’s Sports: UK’s Johnson

Biological males should not compete in women’s sports, and children should not be allowed to make decisions about changing their gender, British Prime Minister Boris Johnson has said.

Talking to reporters during a visit to a hospital in Welwyn Garden City, Hertfordshire, on April 6, Johnson said: “I don’t think that biological males should be competing in female sporting events. And maybe that’s a controversial thing but it just seems to me to be sensible.”

“And I also happen to think that women should have spaces, whether it’s in hospitals or prisons or changing rooms or wherever, which are dedicated to women,” he said, echoing the view expressed by the UK’s equalities watchdog that women-only services can in certain scenarios exclude transgender people.

The Equality and Human Rights Commission (EHRC) said on April 4 that organisations such as refuges and gyms can legally exclude transgender people from single-sex services in certain scenarios, such as to prevent trauma and enable privacy.

The Conservative prime minister also expressed doubt over the feasibility of allowing children to decide whether they want to change their gender.

He said: “I don’t think that it’s reasonable for kids to be deemed so-called Gillick competent to take decisions about their gender or irreversible treatments that they may have. I think there should be parental involvement at the very least.”

Johnson made the comments after being asked about the decision not to include transgender people in the government’s proposed ban on conversion therapy, which has been criticised by LGBT organisations.

“That’s as far as my thinking has developed on this issue,” he said, adding: “If that puts me in conflict with some others, then we have got to work it all out.”

He said these are “complex issues” that cannot be “solved with one swift, easy piece of legislation,” adding: “It takes a lot of thought to get this right.”

Also on April 6, the Scottish Conservatives outlined support for women-only spaces in areas such as schools, parks, and swimming pools as part of their manifesto for the upcoming local government elections.

Meghan Gallacher, the party’s spokeswoman on gender reform, said the proposals are essential to protect women’s rights and safety.

Under the plans, safe spaces would be introduced in council-run venues across Scotland.

The Scottish Conservatives are the first major political party to make the commitment in their 2022 manifesto.

The move comes in response to requests from women’s organisations seeking clarity on the Gender Recognition Reform Bill proposed by the Scottish National Party-led administration, which is currently going through the Scottish Parliament.

If passed, it would make it easier for transgender people to acquire a gender recognition certificate which legally recognises them as their chosen gender.