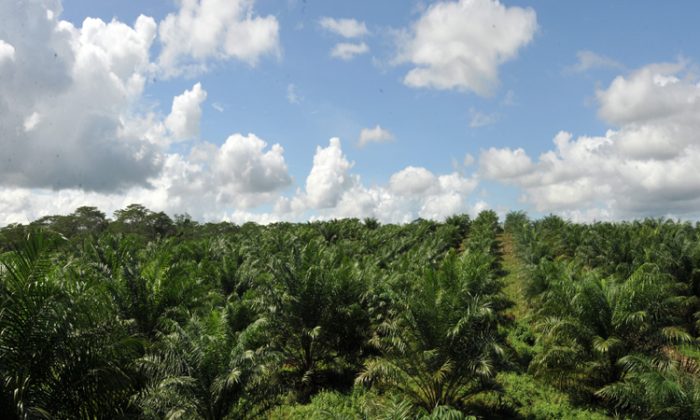 A plantation of oil palm trees in the Philippines, used for biofuel, processed food, and toiletries. The oil palms replace forest, rather than being grown on barren land. (Ted Aljibe/AFP/Getty Images)
International

The environmental benefits of biofuels over fossil fuels may be overestimated, due to problems in the way greenhouse gas emissions are calculated, say two scientists.

In a commentary published in the journal GCB Bioenergy, Kevin Smith of the University of Edinburgh and Timothy Searchinger of Princeton University in the United States, say that current calculations of greenhouse gas emissions overlook important aspects in the lifecycle of biofuel production.

The current Life Cycle Analysis models leave out the CO2 emitted by vehicles that run on ethanol and biodiesel, which supporters of bioenergy say is offset by the CO2 absorbed by the plants grown to make the biofuel.

A fatal flaw in this argument, say Smith and Searchinger, is that often bioenergy crops are grown on land that is already covered in plants, either crops or other vegetation, so the bioenergy crop doesn’t add any new plants to the environment, and therefore doesn’t increase the overall amount of CO2 absorbed.

“The best opportunity to make beneficial biofuels is to use waste material or to focus on relatively wet but highly degraded land,” said Smith in a press release.

Growing biofuel crops on degraded land also means that they won’t compete with crop production for food, textiles, and other products, the researchers argue.

Another aspect that is not taken into account is the release of another greenhouse gas, nitrogen, from fertilizers used to grow biofuel crops.

“Emissions of N2O [nitrous oxide] from the soil make a large contribution to the global warming associated with crop production because each kilogram of N2O emitted to the atmosphere has about the same effect as 300 kg of CO2,” Smith said.

The scientists say that several current Life Cycle Analyses underestimate the amount of nitrogen emitted by fertilizers by as much as half, based on the actual value of N2O observed in the atmosphere.

If these two aspects are taken into consideration, biofuels may not appear to offer such high greenhouse gas savings when compared to fossil fuels, the researchers conclude.