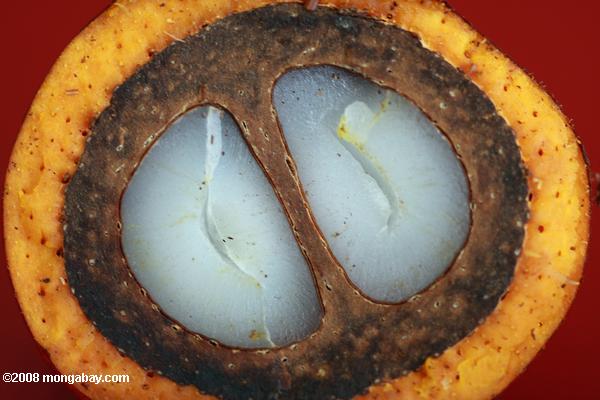 Oil palm fruit, which can be used for biofuel. Photo by Rhett A. Butler.
Environment

A new report from the World Resources Institute finds that dedicating land to the production of biofuels, a form of renewable energy made from plants, may undermine efforts to achieve a sustainable food future, combat climate change, and protect forests.

The global population hit seven billion in 2011 and is expected to grow to nine billion in 2050. Feeding all those people without chopping down forests for agriculture and livestock will already be a difficult task, according to Tim Searchinger, a senior fellow at WRI who wrote the report. Dedicating land to the production of bioenergy crops will make it much harder.

“The bottom line is, the world only has so much land, and we are going to struggle to produce all the additional food we need by 2050 without cutting down more forests,” Searchinger told mongabay.com. “And if you add bioenergy to that it makes it virtually impossible.”

The problem, of course, is that if you dedicate land to growing crops like sugarcane, corn, soybeans, or wood solely for the production of biofuels, you can’t use that land to grow food–or as a carbon sink. We already use a whopping three-fourths of the world’s vegetated land for crops, livestock grazing, and wood harvests, according to the WRI paper. And the remaining land really should be left as is, since it protects clean water, supports biodiversity, and stores carbon.

The cost-benefit analysis simply doesn’t work out in bioenergy’s favor, according to the report. Making ethanol from Brazilian sugarcane, for instance, only converts around 0.2 percent of the sun’s energy. The standard solar cells on the market today, by contrast, are capable of generating as much as 100 times more energy per acre as biofuels. And as the report points out, unlike biofuels, solar panels work great in places where they aren’t in direct competition with food crops or forests, such as desserts and rooftops.

Meanwhile, food for the ever-expanding global population will need to be grown somewhere, and if we’re to avert runaway global warming we need the world’s forests to be sequestering as much carbon as possible. But one 2010 study found that the Amazon rainforest was likely to suffer due to Brazil’s ambitious biofuel goals. While that study found that little forest land would be directly converted to growing biofuel feedstocks, the displacement of cattle ranching, one of the main uses of land in Brazil, to other forest areas by bioenergy production would have a hefty impact on the Amazon.

What Searchinger has found is that, essentially, global targets for increased use of biofuels could lead to the same problem occurring in forests around the globe.

“Some organizations have advocated for a bioenergy target of meeting 20 percent of the world’s total energy demand by the year 2050, which would require around 225 exajoules of energy in biomass per year,” the report states. “That amount, however, is roughly equivalent to the total amount of biomass people harvest today—all the crops, plant residues, and trees harvested by people for food, timber, and other uses, plus all the grass consumed by livestock around the world.”

To meet a 20 percent biofuels target by 2050, Searchinger writes, “humanity would need to at least double the world’s annual harvest of plant material in all its forms. Those increases would have to come on top of the already large increases needed to meet growing food and timber needs. Even assuming large increases in efficiency, the quest for bioenergy at a meaningful scale is both unrealistic and unsustainable.”

What about the direct climate benefits of using more biofuels? Proponents argue that biofuels reduce greenhouse gas emissions, but the WRI report finds that conclusion to be based on faulty logic.

“Studies that find bioenergy reduces greenhouse gases incorrectly view plants as a carbon-free fuel and ignore the very real carbon emitted by burning them,” Searchinger wrote in a blog post about his report. “The theory has been that the original growth of the plants absorbs enough carbon to offset the carbon released when they burn. But if those plants were going to grow and absorb carbon anyway – and typically they would – then diverting them to bioenergy does not remove any additional carbon from the atmosphere. Instead, bioenergy comes at the expense of some other uses of those plants. When the expense is food or agricultural land, the effect is poorer nutrition. When the expense is forests or woody savannas, the effect is less stored carbon.”

Not all sources of bioenergy are problematic. Searchinger says that municipal waste and forest and crop residues such as sawdust and corn stalks, which do not require a dedicated use of land, have potential to be part of the solution to the climate crisis, but only in limited amounts, because there are limited quantities of these biomass sources to begin with.

One of the biggest threats to forests from biofuels, Searchinger says, is that forests are being chopped down to feed power plants. Europe, in particular, has been aggressively using wood pellets supplied by American companies to displace coal in power plants. Though the companies supplying the pellets say they are harvesting the wood in a sustainable manner, environmentalists are weary, and have been calling on the European Union to reconsider. Even in the best-case scenario, the use of wood pellets still results in a net gain in carbon emissions, as it will take decades for the trees they came from to regrow.

But ultimately, it’s extremely difficult, if not impossible, to determine how much expanded production of biofuels might have contributed to global deforestation, let alone to project how future biofuels targets might lead to the destruction of even more forests. “Since we started expanding biofuels, cropping area has grown at a much more rapid rate,” Searchinger says. “And how much that is effecting forests, we don’t really know.”