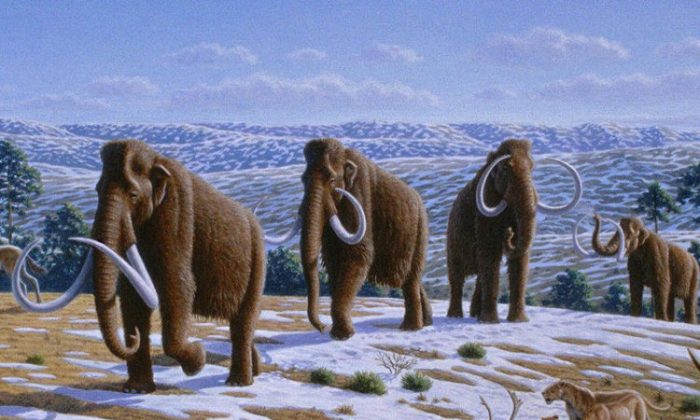 Mammoths were one of the "megafauna" that went extinct during the Pleistocene extinction. According to the first study of mammal range and diversity in "deep time", the mammoth family did not show any sign of being predisposed to extinction. (Heinrich Harder)
Science

The resilience of North American mammals to climate shifts over “deep time” may indicate how modern-day mammals can cope with global warming, according to a new U.S. study.

Over the last 400 years, there has been a record number of mammalian extinctions, with one in four species of land mammals predicted to die out based on a 2008 report by the International Union for the Conservation of Nature.

Mammal diversity is therefore declining when some scientists believe that diversity is exactly what mammals need to cope with rapid climate change.

Researchers at Vanderbilt University, Tennessee, analyzed mammal families from 56 million years ago, when the Eocene began, through to 12,000 years ago, when megafauna such as mammoths and sabre-toothed tigers died out during the Pleistocene or Ice Age extinction.

For example, mammals can move when their environment changes, and being able to regulate their body temperature makes them more flexible, unlike cold-blooded animals, such as reptiles.

The team examined the North American mammalian fossil record at the family level, because species are difficult to identify with certainty. They looked at shifts in the range and diversity of 35 families, including bears, mammoths, rodents, and hoofed animals.

They found that the families’ range and distribution were surprisingly stable despite significant climate change events during the last 56 million years, starting with a very hot environment, about 6 degrees Celsius warmer than nowadays, which would have prevented polar ice forming.

Then, after a period similar to today’s climate, there was a large fall in temperature, followed by rapid warming, and the Ice Ages.

“These data clearly show that most families were extremely resilient to climate and environmental change over deep time,” DeSantis said.

Equidae (horses and donkeys) had the biggest range from the Eocene to the Pliocene, after which they were still very dominant during the Pleistocene.

The team concluded that mammals filled similar niches throughout time, suggesting that niches are heritable and conserved over time—an assumption of models used to predict current mammals’ response to global warming.

Furthermore, there is a link between a family’s diversity and its range—more diverse families were more stable with larger ranges.

“Diversity is good,” DeSantis said. “The more species a family has that fill different niches, the greater its ability to maintain larger ranges regardless of climate change.”

Overall, ranges moved south and east from the Eocene to the Pleistocene, probably due to global cooling at that time.

From the Pliocene to the Pleistocene, any such movement of ranges appears to have been complicated by “The Great American Interchange,” when the Isthmus of Panama allowed South American mammals such as the armadillo to move north.

The researchers found no evidence of decline in families with megafauna or other species that disappeared during the Pleistocene, implying that climate change was not the cause of extinction.

The paper was published in PLoS ONE on April 23.