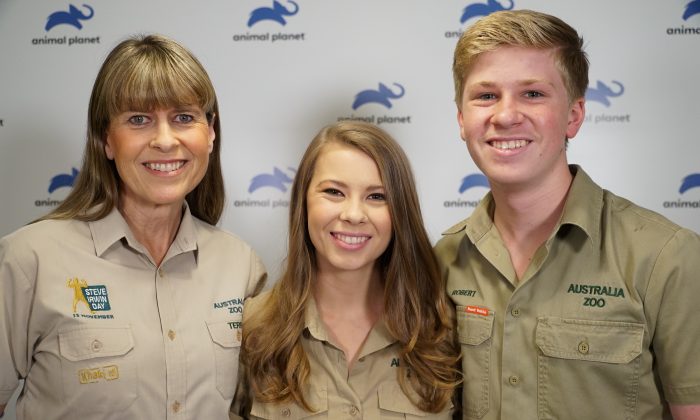 Terri, wife of the late Steve Irwin, her daughter Bindi and son Robert, pose together at the launch of their new family show on the Animal Planet television channel in London, Britain, on Sept. 26, 2018. (Reuters/Will Russell)
Entertainment News

Bindi Irwin, the daughter of “Crocodile Hunter” Steve Irwin, announced she is engaged to her boyfriend of six years.

She shared the news on Twitter: “On my birthday I said ‘yes’ & ‘forever’ to the love of my life. Chandler, close to 6 years ago I fell in love with you & every day since has been a whirlwind of adventure & true happiness.”

She celebrated her 21st birthday while also making the announcement. Irwin also included photos of her and fiance Chandler Powell.

Best day ever! Chandler asked and beautiful @BindiIrwin said yes. I am so very happy, and I know Steve would be too. Congratulations!! pic.twitter.com/sN5sFnxZhI

“Here’s to a lifetime of friendship, purpose & unconditional love,” she added.

In an interview with People magazine, she said, “I am overjoyed to be sharing the news that Chandler and I are engaged! This has been the most special day celebrating my 21st birthday.”

She added, “I’ve met my soulmate and I can’t wait to spend the rest of my life with Chandler. We’ve been together for nearly 6 years now and he’s my happily ever after.”

Best day ever! Chandler asked and beautiful @BindiIrwin said yes. I am so very happy, and I know Steve would be too. Congratulations!! pic.twitter.com/sN5sFnxZhI

Powell told People that he proposed to her at the Australia Zoo.

“After Bindi’s birthday celebration at Australia Zoo, we had a photoshoot organized to celebrate her turning 21,” he said. “Just before we started the shoot, I took her to a special part of Australia Zoo to ask the girl of my dreams to become my wife. These past five years together have been the best of my life and we look forward to a lifetime of magical moments to come.”

Her mother, Terri, also tweeted about the development. “Best day ever! Chandler asked and beautiful @BindiIrwin said yes. I am so very happy, and I know Steve would be too. Congratulations!!” she wrote.

The couple first met in November 2013 and met at the Australia Zoo, where Irwin works.

“It just so happened that Bindi was giving tours that day,” he told People at the time. “I’m like, ‘Wow she is amazing.’” The two “hit it off right away,” he said, adding, “We haven’t looked back since.”

Other details about the engagement, including the date, were not revealed.

Robert Irwin honored his late father, who died in 2006, with a post on Instagram. He shared two photos of him and his father as they fed a crocodile.

The photos showed the two striking the same pose about 15 years apart. The same crocodile, Murray, was included in the photo.

Steve Irwin was killed by a stingray while filming near Australia’s Great Barrier Reef in September 2006. He was 44 years old.

Robert and Bindi have appeared in their own TV show, “Crikey! It’s the Irwins,” which shows them caring for animals at the Australia Zoo.

Bindi Irwin, last year, celebrated her father’s birthday with a message on Instagram.

“Happy Birthday to my dad and grandmother. I wish so much that I could give you birthday hugs. You are both in my heart today and I hope you are celebrating together,” Bindi wrote.