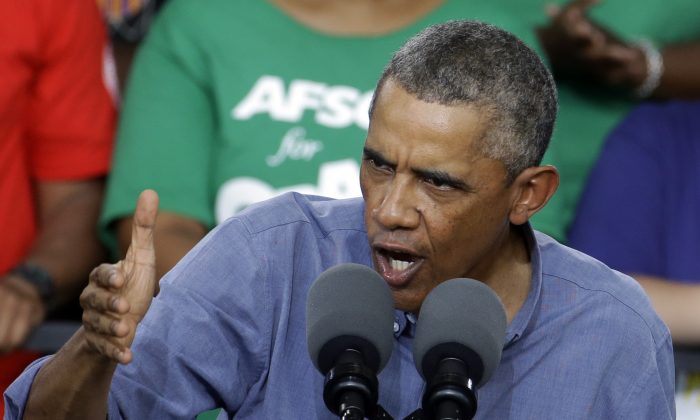 President Obama speaks at Laborfest 2014 at Henry Maier Festival Park Monday, Sept. 1, 2014, in Milwaukee. Obama renewed his call for an increase in the minimum wage. (AP Photo/Morry Gash)
US

Billy and Karen Vaughn, the parents of a SEAL Team Six soldier who was killed in the line of duty, is calling for President Obama to resign.

The couple lost their son, Aaron Carson Vaughn, in 2011 after his helicopter went down in Afghanistan. About three-dozen other people died in the incident.

They wrote a letter to Obama on Monday to slam how he’s handling dealing with ISIS, or the Islamic State. They apparently drafted the letter after journalist James Foley was beheaded by alleged ISIS members a few weeks ago.

“As Commander-in-Chief, your actions – or lack thereof – Mr President, cost lives,” it says. “As you bumble about in your golf cart, slapping on a happy face and fist-pounding your buddies, your cowardly lack of leadership has left a gaping hole — not only in America’s security — but the security of the entire globe.”

It adds: “Your message has come across loud and clear, sir: You are not up to this job. You know it. We know it. The world knows it.”

Billy Vaughn elaborated on the matter to the Mail: “I’d like to see him have some passion about anything going on in the world instead of just speaking in a monotone voice like he has a script that has been made up.”

The couple’s letter has also been making the rounds on conservative and Republican-oriented websites and blogs.