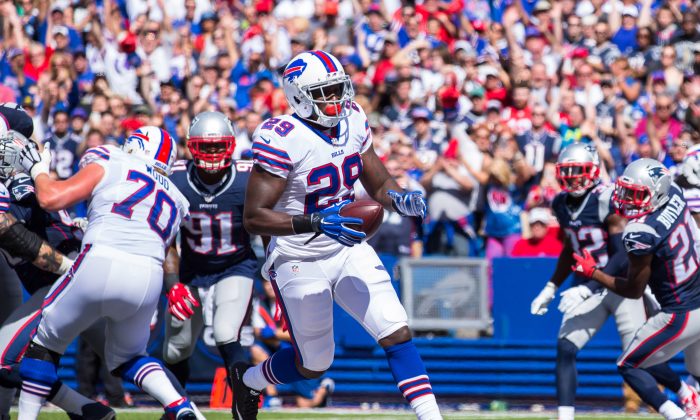 ORCHARD PARK, N.Y.—The Buffalo Bills are not ready to concede the AFC East title to the New England Patriots.

The Bills (5–4) are four games back of the Patriots (9–0) in the division and play Monday night at New England.

“They haven’t won yet, so we have to keep fighting,” Bills linebacker Preston Brown said Tuesday. “You never know what’s going to happen in the NFL.”

“It’s exciting to know that you can be the first team to beat them,” Brown said. “It’s going to be a tough task, but we are up for the challenge.”

The Bills have won two straight coming off their bye week and are in the thick of the AFC wild card race as one of just six teams in the conference with a winning record.

Bills coach Rex Ryan said the game against the Patriots will be a “great barometer” of how much his team has improved.

“I know we have improved as a football team,” Ryan said. “How much have we improved? We are going to find out on Monday.”

This is the sixth time since 2000, when the Bills’ 15-year playoff drought began, that the Bills have a winning record through nine games. The Bills have not been over .500 after 10 games since 2000.

Buffalo is 3–1 on the road this season following Thursday night’s 22–17 victory over the New York Jets. They are in the midst of playing five of six on the road.

The Bills are 3–27 in their past 30 meetings with New England and have won just once at Gillette Stadium, in last season’s finale, when the Patriots rested several key players.

In the Patriots’ 40–32 win in Buffalo on Sept. 20, Tom Brady threw for 466 yards, the second-highest total of his career and the most ever allowed by one of Ryan’s defences.

“We played so poorly in that game,” Ryan said. “We played New England’s game, the way New England wanted us to play, that is how we played. And we can’t let them, or anybody else in this league, dictate that to us.”

I know we have improved as a football team.
— Rex Ryan

The Bills believe their defence is better than it was in the first matchup.

“We honestly feel like we are a lot better defence,” linebacker Nigel Bradham said. “We’ve gotten better each and every week since the last time we played.”

Buffalo’s defence is not at full strength, however. Safety Aaron Williams (neck) is out until December and defensive tackle Kyle Williams (knee) is likely to miss his fourth straight game, Ryan said.

The Bills have also toned down their rhetoric from earlier this season, when players proclaimed their dislike for the Patriots prior to the Week 2 matchup.

“You can’t blow that game up and be so hyped to where you go out and want to fight,” wide receiver Sammy Watkins said. “You got to stay level-headed throughout the whole game.”