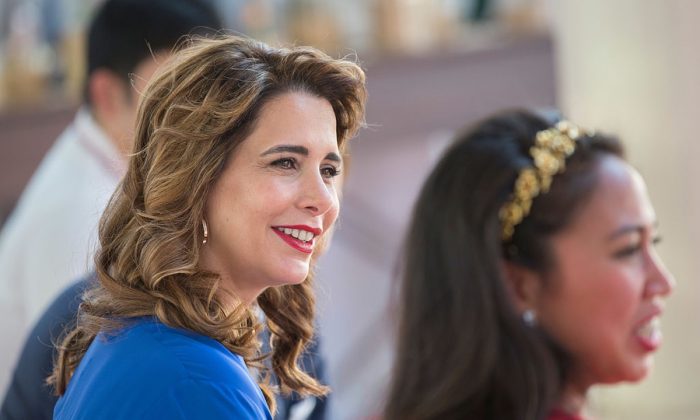 Princess Haya, the wife of the ruler of Dubai, Sheik Mohammed bin Rashid al-Maktoum, has secretly left the country with over $39 million (£31 million) to start a fresh life.

The 45-year-old princess left her husband, who is also the Vice-President and the Prime Minister of the United Arab Emirates (UAE), and who according to Forbes is worth over $4 billion.

The Sun reports that the Princess disappeared in February and is believed to have fled to Germany along with their daughter and son.

Multiple media reports say that she has filed for a divorce and has sought asylum in Germany.

Her escape to Germany has caused diplomatic tensions between the UAE and Germany. The Sheikh has asked Berlin to return his wife and his 11-year-old daughter, Al Jalila and 7-year-old son, Zayed.

The Daily Beast reports that her asylum application has been accepted and that German security officials are protecting her. She’s also reportedly seeking refuge in the United Kingdom and wants to live in London. She’s said to be currently residing in a secret location in London.

The media reports that the Sheik, along with Mohamed bin Zayed, ruler of Abu Dhabi and the president of the entire United Arab Emirates visited Germany to try to work out a solution with Princess Haya.

It is said that there are no hopes of the princess returning to the Middle East and the Sheik will allow a civil divorce.

The Sheikh has penned a poem which seems to be written for his absconding wife. According to the Daily Beast, the poem is titled “You Lived and You Died.”

A few translated sentences from the long poem read: “You betrayer, you betrayed the most precious trust, and your game has been revealed.

“Your days of lying are over and it doesn’t matter what we were and what you are.”

The Daily Beast says that the poem concludes with the Sheik telling the princess that he doesn’t care for her anymore.

“You no longer have any place with me/ Go to who you have been busy with!/ And let this be good for you; I don’t care if you live or you die.”

The Sheik is Cambridge educated and has a passion for horses and racing. He has founded Godolphin, the world’s biggest horse breeding conglomerate.

The Sheik and the princess were often seen together at various horse races, particularly Royal Ascot at Ascot Racecourse in Ascot, England. However, the Daily Beast reports that the princess was not present with the Sheik in the most recent one.

Princess Haya is Oxford educated and is the daughter of the late king of Jordan, Hussein Bin Talal, and her official website is still active.

Her biography on the website describes her as a “devoted wife and mother, a former Olympic athlete, a humanitarian, a UN Messenger of Peace, a former member of the International Olympic Committee, former President of the International Equestrian Federation and the first Jordanian woman to hold a license to drive heavy trucks.”

The Daily Beast reports that the Sheik has at least seven wives and acknowledges 23 children. Emirates Woman had previously called the couple perfect in an article and shared pictures to show their bond.