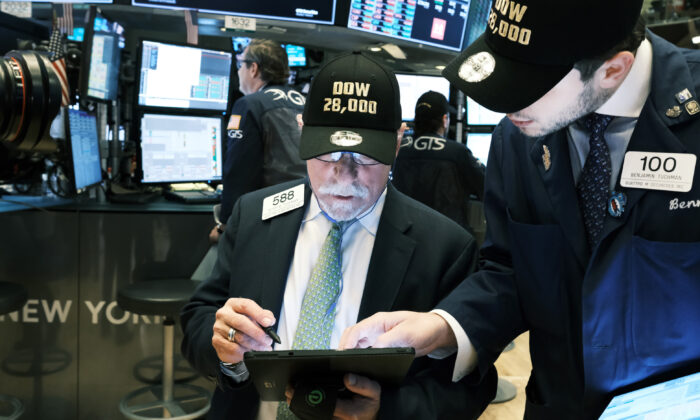 A handful of billionaire investors worry that a successful Democrat bid for the White House in 2020 would spark a stock market meltdown, with some saying by as much as 40 percent.

Ray Dalio (worth $18.7 billion), Paul Tudor Jones (worth $5.1 billion), and Stanley Druckenmiller (worth $4.7 billion) are just a few of the market-movers fretting about stock indices falling should a Democrat end up in the Oval Office, particularly if it’s one of the far-left candidates.

Dalio estimated a drop of around 22 percent, Jones predicted 26 percent, while Druckenmiller said that a victory by Sen. Elizabeth Warren (D-Mass.) would pull the stock market down between 30 and 40 percent.

Kevin Muir, a veteran trader and author of the MacroTourist, a macroeconomics blog popular among professional investors, crunched the numbers being thrown around by the billionaires and discussed his findings with The Epoch Times.

“To some extent, the market is a discounting mechanism, and that is what would be going on behind the scenes,” Muir said, referring to a set of specific predictions that Jones made based on a model that incorporated odds from an elections market, such as PredictIt, where people bet on election results.

“Attaching probabilities to it, trying to discount it, and so figure out the fair value based upon the potential outcomes of these leaders winning,” Muir said of the methodology that would have underpinned Jones’s comments when, at last month’s Greenwich Economic Forum, the billionaire made some shocking predictions about a hit to the stock market in case of a Democrat win versus a market rally if President Donald Trump is reelected.

“We did this poll internally about where the S&P would trade if Elizabeth Warren became president. And then Biden, Buttigieg, Klobuchar, etc., and then we took the election probabilities,” Jones said at the forum on Nov. 1.

The hedge fund founder said his model showed that a victory by Trump would send the S&P to 3,600.

Dalio, who shared the stage with Jones, echoed his perspective.

“I’m just mechanistic, so I go through the calculations, and if you take away the way corporate taxes have been changed, the undoing of that, that’s worth 7 or 8 percent. If you take the changes in the GAAP accounting, so changes in the taxes, taxes for corporations, that’s worth about 15 percent of earnings and therefore, would drop it on that basis alone. If you take, then, the wealth tax, that’s $2.8 trillion over 10 years, and that’ll have an effect.”

Muir was more modest in his estimates, saying: “In terms of the specifics, I think they’re probably a little too low, 2,250 sounds extreme to me. I think it’s just billionaires sounding all worried about it.” He called Jones’s predictions “a really interesting intellectual exercise,” but cautioned against using them as “the holy grail of figuring out the fair value for the stock market.”

The veteran trader said he expects that if someone such as Warren were to win, her more extreme policies would be constrained by compromise, which he said would likely be forced because of the nature of the U.S. political system. Still, he noted that many market players find her policies frightening.

“A lot of the policies that she has are very scary for the market,” Muir said, “like the financial transaction tax, going after the banks.”

Muir said that because some of Warren’s more extreme policies would likely not make it to implementation, “a 20 percent drop is a much more reasonable expectation” in the event of a Warren win.

“If we change the decline to a 20 percent bear market (2,454) and move Biden and Buttigieg to a 10 percent correction (2,760), we get a 3,741 balancing figure for Trump,” Muir said, discussing revisions to Jones’s Nov. 1 figures, when the S&P was at 3,050. Muir’s model gives a figure 141 points higher in case of a Trump win than Jones’s calculations. The market strategist said what may account for the difference is that he used a different election market as reference.

Muir said his calculations were closer to “back-of-the-napkin voodoo” than a precise prediction, but noted that they are “illustrative of how the election might be moving markets.”

“This is Paul Tudor Jones’s kind of view of the world, where he says, ‘Well, the market is already discounting the possibility of Warren and Sanders winning, and if we do have a Trump win, then the reality is that it’s been held back and it’s going to rally hugely.'”

A calculation on Dec. 19, based on the model provided by Muir and assuming a 20 percent and 10 percent correction for Sanders/Warren and Biden/Buttigieg, respectively, would mean that a Trump win would boost to the S&P from its current 3,197 to 3,696.

Using Jones’s more radical assumptions of a 26 percent and 12 percent correction for Sanders/Warren and Biden/Buttigieg, respectively, a Trump win in 2020 would put the S&P at 3,826.

Muir suggested that Bloomberg, Clinton, and Yang would be stock market neutral, meaning their policies would arguably not have an appreciable impact on the index valuation.

Muir said his main reservation with respect to his model is that he isn’t that confident in the accuracy of the market as a discounting mechanism.

He pointed to the fact that stocks rallied after Trump’s 2016 win, defying forecasts for a selloff, based on his campaign rhetoric of cracking down on trade imbalances. Similarly, the gloom markets expected after Bill Clinton’s 1992 victory failed to materialize as stocks soared as the tech bubble inflated.

“Sometimes markets can’t look that far forward,” Muir said. “It might be something that the market has not quite caught on to enough and you might make the argument that what Tudor is assuming is priced into the market is not actually priced in yet, and therefore we need to go lower as the market increases the probability that Bernie Sanders or Elizabeth Warren might win.”

“I can see a situation where if it was Warren or Sanders that won, you would have a market opening that was down, almost a crash, and then we rally from there.”

“And I can see a situation where the opposite occurs if it’s Biden or Buttigieg, and we have a little bit of a dip, where it doesn’t seem so bad, and then we melt for the next six months or a year.”

“Short-run, everybody’s worried about Sanders and Warren,” the market strategist said. “I actually am more worried about Biden and Buttigieg because I think they’re going to try to balance the budget.”

“When economies try to cut spending and fix it with lower monetary policy, it’s proved to not work,” Muir said. “I think Europe is a perfect example of that.”

Inflation in the eurozone remains stubbornly below target despite repeated doses of monetary stimulus by the European Central Bank, including quantitative easing and interest rates at or near zero.

On Dec. 17, the European Commission called on eurozone governments that have fiscal space to do so, to loosen their purse strings and spend more in an effort to boost inflation and job creation. This would mainly refer to Germany and the Netherlands, which have large budget surpluses and relatively low public debt.

The commission, which is the executive body of the European Union, expects eurozone economic growth at 1.2 percent next year and in 2021, against 1.1 percent in 2019.

America’s economy, by contrast, grew by nearly 3 percent last year, buoyed in part by a budget deficit of $984 billion in fiscal year 2019. This figure is 4.6 percent of the nation’s gross domestic product (GDP).

“Americans from all walks of life are flourishing again, thanks to pro-growth policies enacted by this administration,” acting Office of Management and Budget Director Russ Vought said in a statement accompanying the release of the figures in October.

“Clearly, asset prices today, whether it’s U.S. stocks, whether it’s interest rates, whether it’s the dollar—it’s all priced off of, in my opinion, a 5 percent budget deficit with this incredibly over-stimulative fiscal policy, combined with this overly stimulative monetary policy,” Jones said. “It’s creating this U.S. exceptionalism.”

Muir said: “I think this has been the problem up until now, namely that America has been the only place to be. Look at the stock market in America—it’s outperformed everyone else by a wide, wide margin.”

“And I think there could be nothing better for the whole global economy than if Europe and these other countries that have been trying to fix their economies with more extreme monetary policy, put that failed policy to bed.”

Jones said: “If we normalize our deficit to where Europe is right now, we’d have a completely different valuation for the stock market, valuations for the dollar. The dollar would be essentially lower, I believe. So this next presidential election and what policies they pursue after, I think this one is going to be more meaningful than any one, certainly in my lifetime.”

“So as an investor, you have to have a view on the election because the outcomes are so extreme. I’ve never seen this kind of polarity in elections as we have now. And they always say, ‘It doesn’t make any difference who the president is, the markets rallied 53 percent at the time of the Democrats, 52 percent at the time [of the Republicans].’ But it does make a difference.”

“Ronald Reagan, when he became president, it was a huge difference to the stock market.”