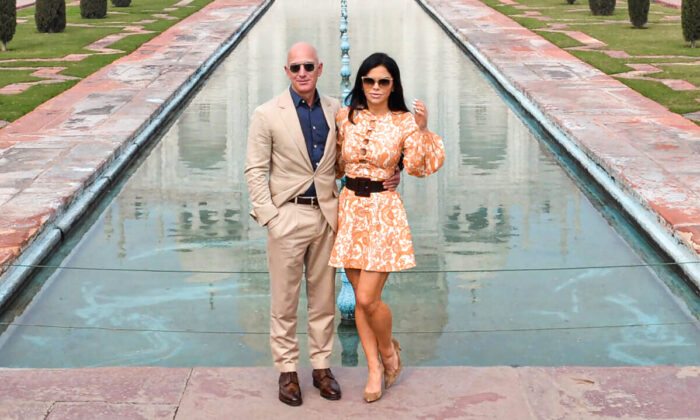 Amazon founder Jeff Bezos (L) and his girlfriend, Lauren Sanchez, pose for a picture during their visit to the Taj Mahal in Agra, India, on Jan. 21, 2020. (Pawan Sharma/AFP via Getty Images)
Stocks

Billionaires Lose $1.4 Trillion in 1st Half of 2022: Bloomberg Index

It wasn’t only retail investors who lost a lot of money in the stock market. In the first half of 2022, the world’s richest 500 people lost $1.4 trillion, according to the Bloomberg Billionaires Index.

This is the largest six-month decline in wealth in the history of the billionaire class worldwide, following two years of strong gains.

Meta CEO Mark Zuckerberg saw his fortune plunge by about $63 billion to $62.5 billion as of July 5, according to the index. Zuckerberg’s sharp drop in wealth was caused by a 50 percent slump in Meta stock.

The net wealth of Tesla and SpaceX CEO Elon Musk dropped to about $215 billion as a result of a loss of close to $56 billion. The sharp slide was driven by the more than 40 percent drop in Tesla shares to just below $700 in the period.

Amazon founder Jeff Bezos lost $55 billion, as his wealth slumped to $137 billion. Despite being one of the top-performing companies throughout the coronavirus pandemic, Amazon shares tumbled nearly 34 percent from January to June.

On an international level, Changpeng Zhao topped the list, with his fortune taking a hit of about $77 billion. The Canadian billionaire is the CEO of Binance, the world’s largest cryptocurrency exchange.

The steep losses were caused by poor company performance, violent swings in certain sectors of the market, and the broader downward trend.

That’s a reversal of what had been transpiring since the early days of the coronavirus pandemic, when governments and central banks unleashed trillions in fiscal and monetary stimulus and relief that sent valuations for nearly every asset higher. Now that the Federal Reserve and its counterparts have set aside their pandemic-era tools, investors have been fleeing stocks and seeking shelter in conventional safe-haven assets.

The technology sector has been eviscerated this year. The tech-heavy Nasdaq Composite Index has tumbled about 30 percent this year, with many of the big names crashing. The Nasdaq slipped into a bear market this past spring.

Cryptocurrency has also erased about $2 trillion from the industry’s market capitalization peak in November 2021, falling below $900 billion.

Meanwhile, the U.S. Dollar Index (DXY), a measurement of the greenback against a basket of currencies, has rallied about 11 percent year-to-date to a 20-year high.

Many billionaires may have lost a significant portion of their wealth in the year’s first half. But since they already control a substantial amount of capital, they could be hunting for opportunities, market experts say.

Musk could be on the cusp of finalizing his purchase of Twitter for $44 billion. Sam Bankman-Fried, CEO of crypto exchange FTX, acquired a 7.6 percent stake in Robinhood Markets; it’s been speculated that Bankman-Fried could take over Robinhood. Vladimir Potanin, Russia’s richest man with a net worth of $35.2 billion, bought out Societe Generale’s entire position in Rosbank PJSC as well as Russian mogul Oleg Tinkov’s stake in a digital financial institution following Moscow’s invasion of Ukraine.

Could billionaires and armchair traders pare their losses in the second half? The leading benchmark indexes have already been off to a rough couple of sessions. The Dow Jones Industrial Average has ticked back above 31,000. The Nasdaq Composite Index is hovering above 11,000. The S&P 500 Index is trading around 3,800.

With recession and inflation fears dominating stock trends, it could be an uphill battle for investors this summer, market strategist Sankar Sharma warns.

“Our market analysis for the rest of 2022, shows that markets still could go down further this summer,” he recently told The Epoch Times. “We are watching certain key levels and at these levels, we want to see the markets stop their downturn, go sideways, and stabilize before we can say we are ready for an up move. We expect a lot of companies to give a negative or no outlook for the rest of the year when they announce earnings. Companies will have to watch out for their inventories. The Federal Reserve has the toughest job of avoiding stagflation and avoiding a hard landing.”

But investors may start looking at fundamentals again, using metrics such as balance sheets and cash flows, said Robert R. Johnson, a professor of finance at Creighton University’s Heider College of Business.

“For the long-term investor, stocks are certainly more attractive than they were at the start of 2022,” he told The Epoch Times. “Investors should favor firms with strong balance sheets, strong cash flows, lower debt, and higher cash positions. That is, value stocks look more attractive than growth stocks in this volatile environment.”

Jim Reid, head of global fundamental credit strategy at Deutsche Bank, said in a July 1 note that he doesn’t believe the second half looks strong.