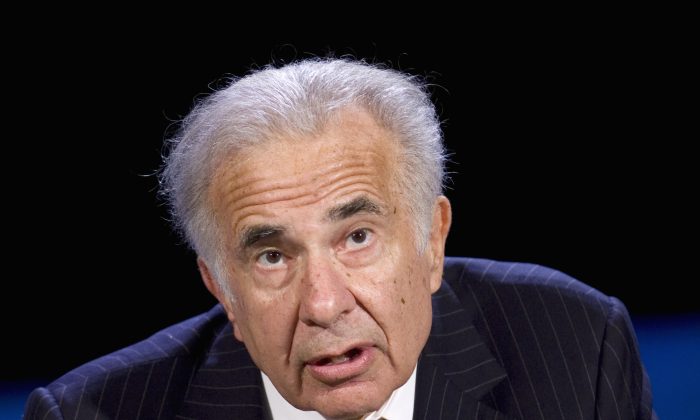 Carl Icahn speak in New York on Oct. 11, 2007. Icahn is vowing to create a $150 million super PAC that pushes a corporate tax overhaul. Icahn says in a letter on his website that he wants to press Congress to pass legislation that stops U.S. companies from moving their profits overseas to take advantage of lower tax rates. That practice is known as “inversions.” (AP Photo/Mark Lennihan)
US

Icahn will use his super PAC to press Congress to pass legislation that stops U.S. companies from moving their profits overseas to take advantage of lower tax rates—a practice known as “inversions.”

American corporations—including Apple, one of his own biggest investments—are holding more than $2.2 trillion abroad, Icahn said. The investor laid out his plans in a letter posted on his website, which he said he also delivered to lawmakers.

Icahn said he will seek super PAC donations from others but noted in his letter that his own $150 million should be “more than enough to make voters fully aware of the horrible consequences” of inversions. He said in an interview Wednesday on the cable business channel CNBC that he’s taking action because he’s tired of Congress dodging the issue.

“These guys are unwilling to compromise,” he said of lawmakers. “They have to be held accountable.” He said it would take “a simple law” to address inversions and “It’s ridiculous not to do it.”

Icahn joins other billionaires, including environmentalist Tom Steyer and gun-control advocate Michael Bloomberg, in using super PACs to tackle a single policy issue. Through these political action committees, those two have spent tens of millions of dollars in recent elections boosting politicians who agree with their viewpoints on those topics and criticizing those who don’t.

Steyer and Bloomberg have seen limited success with their political projects.

Although Icahn has not given details about how he’ll use the super PAC, his letter indicates it’ll focus its financial muscle on members of Congress rather than on the 2016 presidential candidates.

But Icahn, who describes his politics as “centrist,” is a friend and supporter of Donald Trump, the celebrity real estate mogul who has dominated the Republican presidential race for months.

Icahn endorsed the fellow billionaire about a month ago in a web video. One of the reasons he gave was their common interest in repatriating corporate money sheltered overseas.