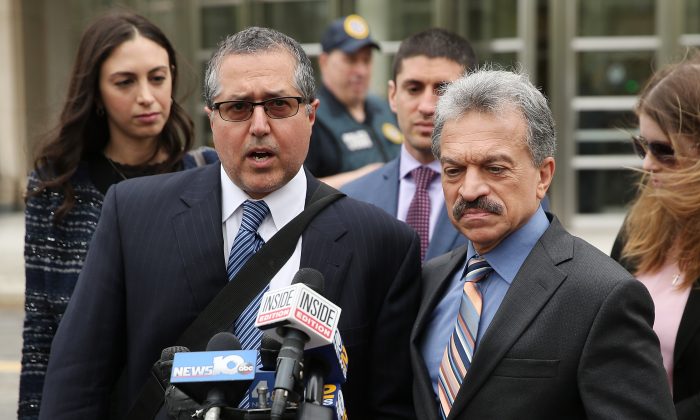 Clare Bronfman, heiress to the Seagram fortune, allegedly has been paying the legal fees for leaders of the NXIVM secret society who are standing trial on charges of sex-trafficking and racketeering conspiracy. Prosecutors argued the lawyers may face a conflict of interest, partly because Bronfman is a co-defendant.

“The government has been advised that the legal fees of the defendants in this case, as well as certain witnesses, including Nxivm the corporation, have been paid by an irrevocable trust … to which defendant Clare Bronfman is the primary contributor,” the prosecutors wrote in a Nov. 30 court filing.

New York-based NXIVM masqueraded as a self-help company that ran “executive success programs” and other self-help curricula, prosecutors say. In fact, they allege that the society functioned as a boot camp of sorts for recruiting personal slaves for its leader Keith Raniere.

NXIVM recruited members on the condition they gave up personal information about themselves, including compromising images or videos, as “collateral”; once inside, members were regularly required to provide additional collateral to ensure they kept secret the society’s activities and inner workings, according to a May 23 court document.

The defendants have denied the charges.

Bronfman, the daughter of the late billionaire liquor mogul Edgar Bronfman, was the group’s largest financial backer, contributing at least $150 million, according to Frank Parlato, a whistleblower who first broke the story about the society’s schemes. Aside from Bronfman and Raniere, the defendants include Allison Mack, Kathy Russell, Lauren Salzman, and Nancy Salzman.

The prosecutors said “defendants’ counsel faces a potential conflict of interest” because third-party funding “‘may subject an attorney to undesirable outside influence’ and raises an ethical question ‘as to whether the attorney’s loyalties are with the client or the payor.’”

The lawyers, for example, may face a conflict when advising the clients on “whether to seek possible leniency by cooperating with the government, including against Bronfman, and … whether to testify in their own defense at trial, where such testimony might implicate Clare Bronfman.”

The government has also learned that Bronfman paid the legal fees of multiple witnesses and potential witnesses.

A Bronfman-paid attorney recommended one witness invoke the Fifth Amendment in response to the government’s questions in the grand jury. The attorney said that if the witness couldn’t do so, “the attorney would not feel comfortable continuing to represent” her, the prosecutors stated.

“If similar conditions are being placed on Bronfman’s co-defendants, expressly or otherwise, the advice provided by their counsel might be similarly affected,” the prosecutors said, also noting that “based on their disclosures to Pretrial Services, most—if not all—of the defendants do not otherwise have the means to pay for their attorneys.”

Nicholas Garaufis, U.S. District Judge in the Eastern District of New York, ordered the defendants to respond to the prosecutors’ filing by 3 p.m. on Dec. 5.