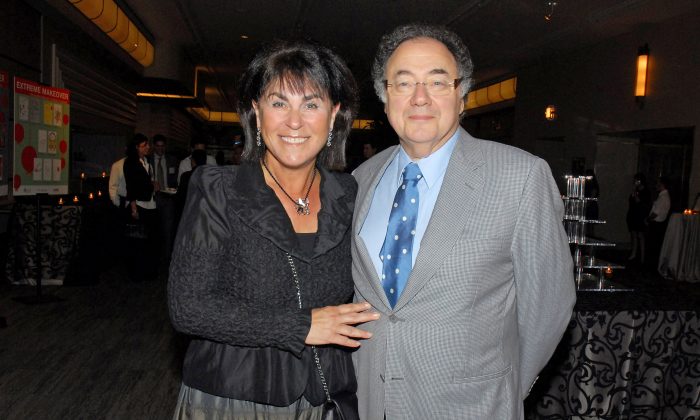 Honey and Barry Sherman were found dead in their Canadian home on Friday, Dec. 15. Photo taken during a fundraiser in Toronto, Ontario, Canada, Aug. 24, 2010. (The Globe and Mail/Janice Pinto/via Reuters)
Canada

The business mogul and his wife who were found hanging in their Toronto home in December could have both been murdered, private investigators now believe.

Before, the deaths of Barry and Honey Sherman had been considered murder-suicides by law enforcement. But a new report by investigators that had been hired by the couple’s family says they were murdered, perhaps by multiple individuals.

Barry Sherman, 75, and Honey Sherman, 70, were found dead on Dec. 15 in their $5.4 million home. They were in an upright seated position near a pool in the basement, with the coroner previously ruling they had died from “ligature neck compression.”

There was no indication of a forced entry.

The new report by private eyes, including some ex-Toronto homicide detectives, says the deaths may be double murders after an extended struggle, probably two days before the bodies were discovered.

A source told CBC Toronto that their wrists were at one point bound together, but had been unbound by the time they were discovered.

Honey Sherman had cuts on her lip and nose and was sitting in a pool of her blood, according to the CBC Toronto source. But there was less blood on her upper-body clothing, which indicates she had been face-down and bleeding on the floor for some time, before she was bound to the handrail.

‘They Wouldn’t Do That’

The Shermans’ family and neighbors have rejected the murder-suicide theory since it was proposed, with neighbor Eli Kanter telling CBC Toronto that, “They wouldn’t do that. They wouldn’t end that way.”

Their son, Jonathon Sherman, said in his eulogy to his parents on Dec. 21, “We’ve had to navigate through a terrifying maze of non-information and unfounded speculation. I kept expecting my parents to walk through the front door and say, ‘Everything will be fine. We’ve taken control of the situation.'”

Barry Sherman was the founder of pharmaceutical giant Apotex and was believed to have accumulated a fortune of $4.77 billion before he and his wife died.

However, according to the NY Post he was fighting numerous lawsuits connected with both the pharmaceutical company and his own fortune.

The Post reported that family members said the couple had planned to travel to Miami and were delighted with the recent birth of a grandchild.