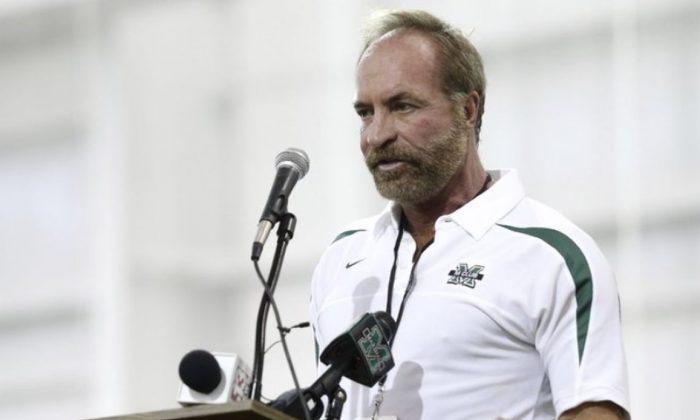 A billionaire coal magnate, Chris Cline, and six others were killed in a helicopter crash near the Bahamas, it was reported.

His daughter, Kameron, who recently graduated from Louisiana State University, was also on the crashed helicopter. Other victims include David Jude, Delaney Wykle, Jill Clark, and Brittney Searson. In all, seven people were on board.

His family, in a statement to the Daily Mail, said that “we are all so deeply saddened to announce the deaths of our beloved father Chris and our sister Kameron. This loss will be felt by all those who had the privilege of having known them.”

“A loving and charitable man.” Chris Cline, a billionaire coal tycoon from West Virginia, died in a helicopter crash in the Bahamas along with six others. https://t.co/oT11YPFXxJ

“Chris was one of West Virginia’s strongest sons, an American original, full of grit, integrity, intelligence and humor, a testament that our hopes and dreams are achievable when we believe and commit ourselves to action,” the family continued.

The family described Kameron as a “bright light” to those who knew her.

Billionaire Chris Cline’s daughter and her three college graduate best friends who all died with the coal tycoon and two other men in Bahamas helicopter crash. The cause of the crash remains unclear and i.
The bodies arrived on shore in a police boat on Thursday night pic.twitter.com/bTtWQWRJgi

“Their legacy of love and inspiration will live on through all of us,” the family stated. “We love and miss them dearly but take comfort knowing they are with God now. We ask for prayers and privacy in our time of grieving.”

Tributes poured in on social media on July 4 to remember Wykle.

BREAKING: Kenner native and former Mount Carmel Academy volleyball standout Jillian Clark among the 7 people killed in a helicopter crash over the Bahamas. She was a 2019 LSU grad.
– The helicopter was owned by W. Virginia coal mogul Chris Cline

“She had the sweetest soul and had so much life ahead of her,” friend Skylar Simmons wrote on Facebook. “We love you and will never forget our time spent together sweet girl.”

He wrote: “Today we lost a WV superstar and I lost a very close friend. Our families go back to the beginning of the Cline empire—Pioneer Fuel. Chris Cline built an empire and on every occasion was always there to give. What a wonderful, loving, and giving man. Cathy and I are praying for his family and all those involved in this tragedy.”

“Prayers for Family and friends of my great friend Chris Cline and his daughter Cameron and her dear friends who we lost today in a helicopter crash. Chris was an exceptional human being and we all loved him so much. Such a loss for all 7 aboard today. Our hearts are broken,” she wrote on Twitter.

According to ABC News, Cline donated to President Donald Trump for his inauguration fund.

Bahamas Police Supt. Shanta Knowles told The Associated Press that they began searching when police received a report from Florida that Cline’s helicopter failed to arrive in Fort Lauderdale as expected on Thursday.

The bodies of the four women and three men were recovered and taken to the capital in Nassau to be officially identified, Knowles said. The helicopter was still in the water, and based on preliminary information, she did not believe there had been a distress call before it went down.

– Known for donations to medical causes

– Has died at age of 61 in helicopter accident in the Bahamas pic.twitter.com/Y8wafTOXrc

Knowles said that preliminary information suggests there was no distress call before it went down. The helicopter was still in the water Friday, and She said a specialized ship was coming from Florida with equipment to pull the helicopter from the water.

Aviation safety investigators in the Bahamas are working to determine the cause, said Jaime Nixon, an aviation safety analyst for the Air Accident Investigation Department of the Bahamas. The Bahamas Civil Aviation Authority told the Federal Aviation Administration that the Augusta AW139 helicopter was located in the water at about 7 p.m. on Thursday.