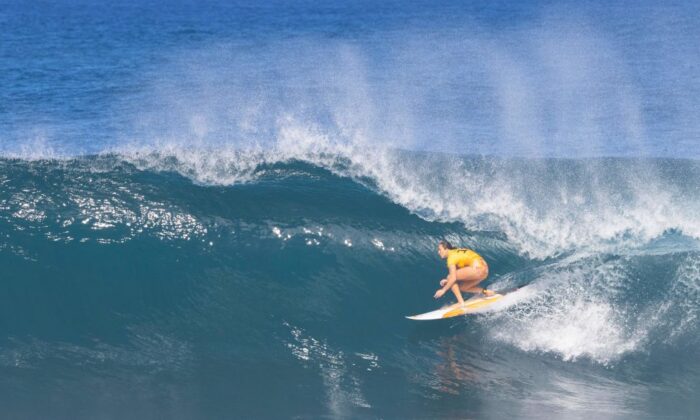 Billabong Pro Pipeline Surfing Event to Be Decided on Saturday

The finals of the Billabong Pro Pipeline Championship Tour surfing event will kick off on Saturday at the famous break on the North Shore of O’ahu, Hawaii.

In the other quarter-finals, Moore was convincing in her win over Brissa Hennesy of Costa Rica, with some solid barrels and rail work to complete her waves, whereas Peterson threaded a Backdoor (right-hand break at Pipeline) barrel in the last 15 seconds of her heat to take out Johanne Defay of France.

In the first semi-final, Wright will bring with her the experience of having won the same event at Pipe in 2021 after it was moved from Honolua Bay, Maui, midway through the event. In addition, she’s a two-time world champion.

However, she’ll have her work cut out for her because her opponent, Jones Wong, is a Pipe local who knows the wave well and has been showing consistent form throughout the event. On top of that, she won the recent HIC Pipe Pro Qualifying Series event.

“I started surfing Pipe when I was 12, and I’ve been coming here consistently since I was 18,” Wong said.

In the other semi-final, five-time world champion and Olympic gold medalist, Moore will go in favourite, and although she lost to Wright in the same event in 2021, she has pulled the biggest scores so far in the event, with great wave choice and barrel riding technique.

Her opponent, however, will be no push-over. Peterson is a Championship Tour (CT) veteran who has come back strongly this year after injury-shortened her 2021 season, and interestingly, in head-to-head stats, Peterson has won nine of their 17 CT meetings.

Meanwhile, the men’s event is at the quarter-finals stage and will kick off on Saturday with 11-time world champion Kelly Slater of the United States taking on Olympic silver medalist Kanoa Igarashi of Japan, followed by Miguel Pupo of Brazil vs Lucca Messinas of Peru.

The third heat will see Hawaiian’s former world champ John John Florence and Seth Moniz battle it out, with a similar situation in the fourth heat as Brazilians Caio Ibelli and Samuel Pupo go head to head.

Based on form in the event so far, Florence would be considered the favourite, having twice scored over 17 with his ability to take off behind the curtain, get deep in the barrel, and maximise his time there.

Slater, meanwhile, has also scored consistently high, favouring the Backdoor wave, of which he is a master, and surfing like a man half his age.

The event will wrap up on Saturday, waves permitting, with the next leg of the CT tour set to begin at Sunset Beach, Hawaii, on Feb. 11.