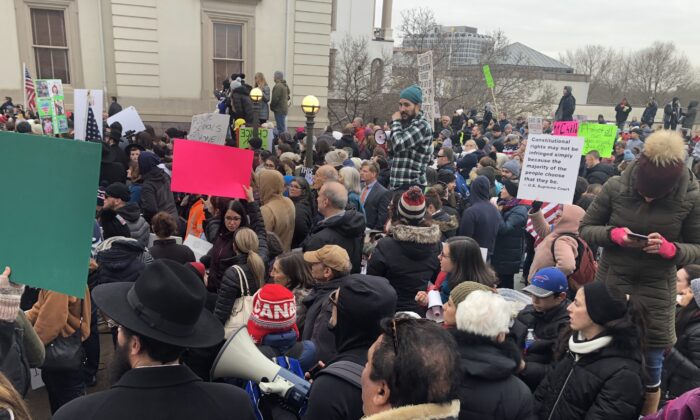 Protesters against a bill that would end religious exemptions for vaccines stand outside the New Jersey State House in Trenton, N.J. on Jan. 13, 2020. (Celia Farber/The Epoch Times)
US News

TRENTON, N.J.—Protesters were jubilant the evening of Jan. 13 as the New Jersey state Senate failed on the last day of the legislative session to bring to a vote a measure that would have eliminated religious exemptions for state-mandated vaccines.

Senate President Steve Sweeney (D-Gloucester), who couldn’t muster the votes needed for passage, vowed that the bill would be reintroduced and promised to be “ready to go to war” over the measure.

When the Senate session was gaveled to a close at around 6 p.m., and it was clear the bill—known as S2173—wouldn’t come to a vote, cheers and shouts of “Thank You!” broke out inside the Senate chamber, where 100 protesters had waited all day. Outside, thousands of protesters cheered wildly.

According to the New Jersey State Department of Health, 13,987 children in New Jersey are currently protected from mandated vaccinations by a law that assures the parents only need to write a letter stating they object to vaccines on religious grounds.

The protesters say this is a battle over parents’ rights to choose and the religious freedom to abstain. The backers of S2173 say this is simply a matter of public health. At bottom, this controversy is over whether vaccines are safe.

While the protesters were primarily from New Jersey, some had come from several other states. The protests had begun a week before, on Jan. 6, with individuals standing in the cold the entire day, some with their children in tow. Many Orthodox Jews were in attendance, both outside and inside the Statehouse, praying.

On Jan. 13, hot coffee and boxes of pizza were distributed, and the mood was patriotic, with elements of religious faith.

On this day, the protesters won. The intensity, size, and duration of the protests were said to be a factor in the failure to generate enough support. The crowd was told that their chants of “Kill the Bill!’’ and “Just Vote No!”, and “In God We Trust!” were heard inside the chamber all day as other legislation came up for votes.

An amendment added to S2173 on Jan. 9 complicated efforts to approve the bill. The measure would have eliminated religious exemptions in public schools but allowed private schools to retain their exemptions, with public bulletins announcing the schools’ vaccination rates.

The effect of this amendment would be to discriminate against the less privileged, who don’t have access to private schools. A number of black politicians, led by Assemblyman Jamel Holley (D-Union), who has already opposed the bill, objected that it was a form of segregation and came out against the legislation.

Protesters who congratulated each other and exchanged hugs on Jan. 13 vowed to not let down their guard and were already preparing to return to the Statehouse in Trenton, knowing that their opponents would not back down so easily.

Sweeney said in a statement that the bill would be reintroduced on the first day of the new legislative session.

“We’re ready to go to war on this and we will,” Sweeney said. “We will pass this bill. It’s not an easy one, and a lot of bills we do aren’t easy and take time to get through. But this is about public health. It’s about protecting people.”

Since an outbreak of measles at Disneyland in 2014 that was widely covered by national media, vaccine advocates have pushed for closing off vaccine exemption loopholes—medical, philosophical, and religious. They feel that primarily religious exemptions are “phony,” and being exploited.

Dr. Peter Hotez, dean of the National School of Tropical Medicine at the Baylor College of Medicine in Houston, warned of the potential for the religious exemption to get around vaccine mandates. “As the anti-vaccine movement grows in strength and power, they could use the religious exemption loophole,” he wrote in an April 2019 article in Americans United for Separation of Church and State’s journal.

But he added, “Right now, I don’t see it as significant as an issue.”

Channel 24 in New York reported that Sweeney was planning on promising those who voted against S2173 campaign funds through a Super Pac called General Majority to switch their votes.

Among the protesters were many parents who said their children were injured by vaccines, and they had come to Trenton to try to prevent this from happening to other children.

A man who identified himself as Mr. Jackman spoke to The Epoch Times after the protest.

“My son David brought me here. He was injured the day he was vaccinated. He’s only called me ‘Daddy’ once, in 13 years since,” he said.

“When he was 2, he called me daddy all the time. He’s a gentle, lovely boy, but he’s brain-damaged. He was not only allergic to the vaccine, but he was recovering from Lyme disease. I didn’t want to do it. It was the worst decision of my life.”

He broke down weeping, and a woman held him.

“I have had such pain these last 13 years, because I did it to my son. I didn’t protect him. I’m sorry I’m losing it.”

He put his head into his hands and wept.

Wiping his eyes, he continued.

“Anyway, that’s why I’m here, for David Jackman. Because he was injured. We’re a marginalized group of people. They want to silence us. Our voice was heard today.” (To view thousands of parents’ first-person testimonials of vaccine injuries, see “Vaxxed” channels and “Hear This Well” on YouTube.)

While the stories of individuals such as Jackman have often been dismissed by the media, in Trenton, some politicians have begun to go to bat for such parents.

Del Bigtree, a vaccine safety advocate, documentary filmmaker, and host of a program that focuses on vaccine safety called “The Highwire,” said politicians came out and told the crowd at different points that they would fight for them.

They saw the size of the movement, Bigtree said, and wanted to embrace rather than fight their constituents.

Holley was cheered as if he was a rock star when he emerged from the Statehouse, and spoke strongly against S2173.

“When you get into a situation where the government tries to infringe on your freedom of your rights, that’s government overreach,” Holley told The Epoch Times after the protest, as parents clamored to hug, thank, and take selfies with him. “We’re in 2020. Those days of segregation are over. And I’ll be damned if I’m going to sit by and allow people to separate us. We’re going to separate them out.”